February 23, 2014
Yes, I knowed Paul Bunyan. My father worked fer him when I wuz a little shaver an' I uster allus tag 'long. Logger? Wal, I sh'd say-cut m' teeth on a peevy an' rooled logs in m' first long pants. "Twuz some loggin' them days-trees all round here twelve t' fourteen foot thru.


My apologies! I thought I had published this post already, Blogger is up to its usual tricks! 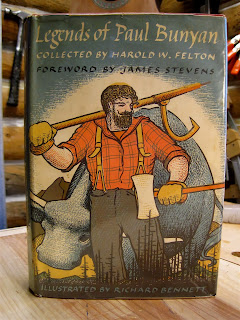 This book, Legends of Paul Bunyan, collected by Harold Felton, showed up in the mail the other day, and I must say, if you have never read any books about Paul Bunyan then you should read this one! It's a wonderful collection of stories, poems and songs about Paul and his life, there is even a poem by Robert Frost in this collection. There are stories by the usual Paul Bunyan authors: W.B Laughead, James Stevens, Esther Shepard, Wallace Wadsworth, etc., and stories that were gathered from real loggers. Gorgeous illustrations and many hours of fun reading.

I mentioned in a previous posting that I was born and raised where the southern end Cascade Mountain Range collides with the northern end of the Sierra Nevada Range. It was magical to grow up in a land of old growth timber, there were ponderosa and sugar pines six feet through right out our back door. Then there were all the stories about the men and women who worked in the lumber camps and surrounding communities, I miss those who told those stories.

Many of the events in those family stories took place in the sawmill town of Lyonsville, California. There the Champion Mill produced lumber which was floated down to the kilns and yards via a flume to Red Bluff, California. The Sierra Lumber Company used 0-6-0T Porter locomotives to haul the trees in from the lumber camps and log chutes to the mill, and it ran on meter gauge tracks. When the line was first laid down, Tehama County couldn't tax Sierra Lumber Company, because meter gauge was not used anywhere else in the United States. That was quickly rectified. 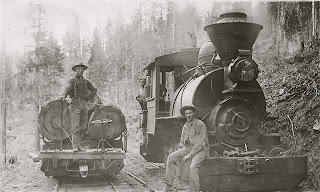 
This "Uncle Sam", locomotive #3 that operated from Lyonsville. According to John Barnhill at Foothill Rails, click here to see his website, "Uncle Sam" was made by H.K. Porter & Co. in 1896. 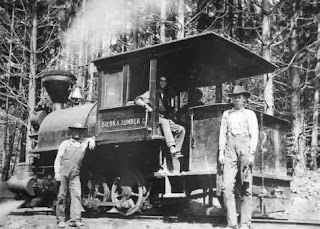 This is "Antelope", locomotive #2. I think it was named "Antelope" partly as a joke, these weren't fast engines and the Champion Mill sat right on the edge of the North Fork of Antelope Creek. It also ran on the Lyonsville line. Mr. Barnhill states that "Antelope" was by H.K. Porter & Co. in 1883. 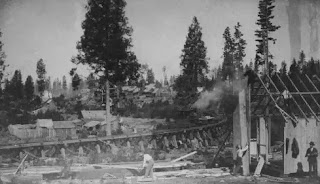 Here is a shot of "Antelope" pushing a load into Lyonsville (I can tell it's #2 from the smokestack. This is a great shot, I rarely find old photos of carpenters building houses. 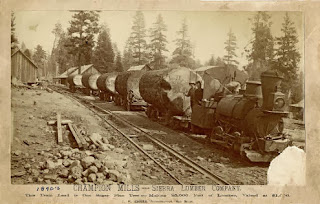 I believe this was the first locomotive purchased by the Sierra Flume and Lumber Company, the predecessor of the Sierra Lumber Co. Barnhill states that this 0-4-0 was made by the Marysville Foundry, Marysville, California in 1877 and that it was named "Yellow Hammer". I haven't found any information on the internet about the Marysville Foundry making locomotives, but I did find out that they made other rolling stock.

This is an 0-4-0 locomotive that Sierra Lumber Company purchased from the Union Iron Works in San Francisco in 1881. It was called "Peter Dean", it was later rebuilt as a 0-6-0. 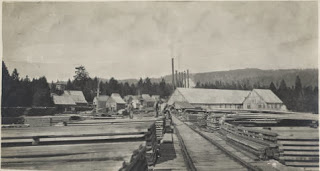 This a the Champion Mill at Lyonsville. The men are stacking lumber, which will later be put into the flume to be shipped down to the Red Bluff yard to be planed and dried before it will be shipped out on the main line railroad. Diamond Match Company had purchased the Sierra Lumber Company by the time this photo was taken. 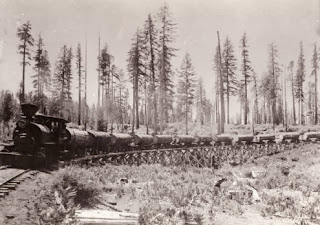 "Uncle Sam" on a trestle somewhere near Lyonsville. I bet that that load is just one sugar pine tree!

My own "Uncle Sam", a Bachmann Spectrum Porter 0-4-0T pulling a load of Douglas fir.