The other room has more floor space. There is a fine old workbench at one end, with tool cabinets and a rack for clamps and other things.

My Dutch tool chest is done, well, except for painting it, installing a hasp and padlock, making a till for the back saws and a little tote to hold some smaller tools.

I am pleased with it, though today, when I loaded it with all the tools I had hanging on pegs on the wall, I realized that it is not big enough! 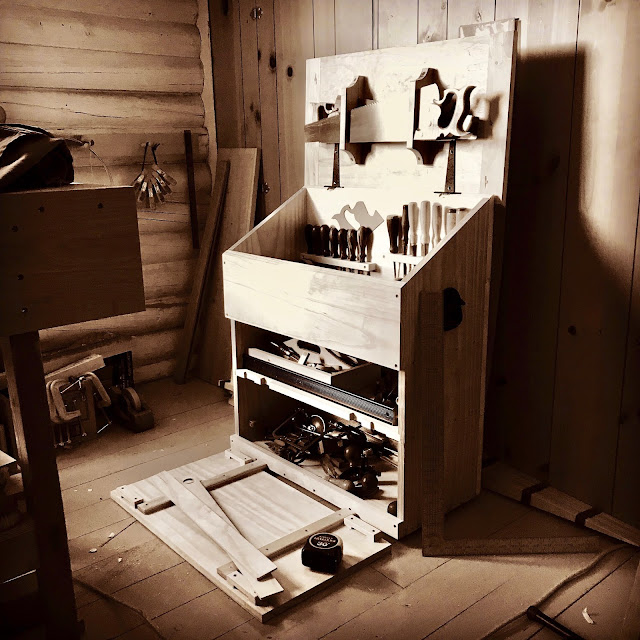 I plan on making another tool box that this tool chest can sit on. Having the main tool box sit higher will be a nice thing, making tools more accessible.

Would I ever make another tool box in this style? Yes, I would, but the next will I will take the time to purchase some nice sugar pine, or find some locally harvested and milled ponderosa pine, I don't like working with this plantation grown radiata pine.

And I might make the next tool chest a little bigger. Just saying!

How does one talk about dovetail joints without becoming a bore?

Those of you who follow my sporadic blog postings know that I make classical guitars, and that is all I want to make, classical guitars. The challenge of creating a box of graceful feminine lines that can produce the most beautiful of sounds is what allures me. The classical guitars I make don’t have complicated joints, there is one scarf joint, some butt and miter joints for the bindings. The guitar sides are attached to the neck by slots and wedges, a technique which dates back to the late 1400's.  There are some makers who join the neck to the guitar body with a dovetail joint, but that never appealed to me, probably because of a side job I took years ago. 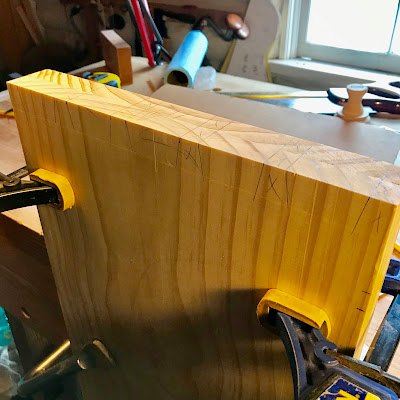 It was 1995 when a friend of mine asked me to make some stereo speaker boxes out of ponderosa pine and he requested that I join the boxes with dovetails. The only book I had at the time that talked about dovetails was one of Roy Underhill’s books, so armed with that knowledge, a shop made marking gauge of pine, a set of Stanley “Made in England” #5002 chisels and a Pax backsaw I set out to complete this job. My first attempt at cutting dovetails was pretty much a failure, I ruined some nice wood and had a devil of a time finding new stuff and when I did, I bought a dovetail jig and router. If you can do it well by hand, a person should be able to do it better with a jig and power tool, was my reasoning to spend money I didn't have. The power tool process went smoothly, though at the time I was surprised that I had to pare the router cut dovetails for a nice fit. I made the four boxes, finished them with some linseed oil and got paid when I delivered the boxes to my friend, who was very happy with my work. I returned the dovetail jig to the company I bought it from, they had a great return policy, and I vowed to never cut a dovetail again, by hand or by router. I knew I didn’t want to become a cabinet or furniture maker, squares, rectangles and triangles didn't hold any appeal for me. To this day, those shapes still don't fire my imagination. 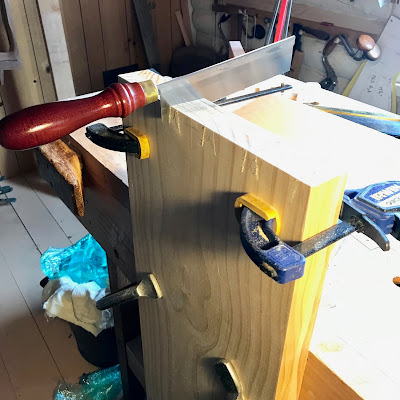 My wife and I have started the process of selling our house, our realtor wants to "stage" the house for showings, which means that we have to box up items and stuff we don't use on a daily basis and store them in my unfinished workshop. Until the house sells, there are several guitars to work on and I need to solve the dilemma of having tools on hand and being able to lock them away when potential buyers are here for a showing. I have several large tool chests, but they are just that, large. A smaller tool chest is in order and the one that appeals to me the most is the so called DTC, the wildly popular Dutch Tool Chest, or as I like to call it, a Dutch style tool chest. It is small enough to force me to select only those tools that I really need to make a classical guitar, the rest of my tools will reside in a large tool chest in the unfinished workshop. 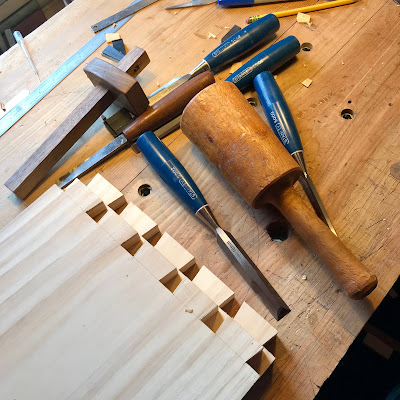 I went to a big box hardware store and bought some radiata pine (pinus radiata), aka plantation grown Monterey pine and decided that I should step up to the challenge of cutting dovetails! I am holding fairly true to the published plans of a DTC, give or take a few eighths to sixteenths of an inch. I refreshed my memory by looking at articles on dovetailing written by Charles Hayward and armed with a shop made marking gauge of walnut, a Zona brand 24 tpi mini back saw, the same Stanley #5002 chisels and a shop made bow saw, I hacked and chiseled and sawed me ten dovetails and correpsonding pins. 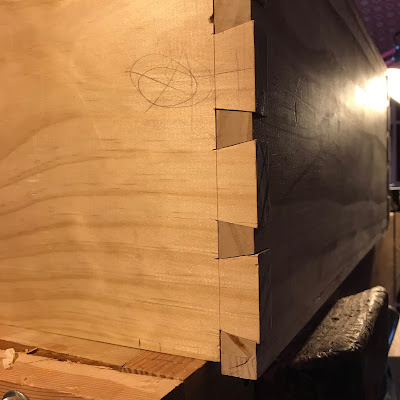 My wife finds that statement to be very funny... 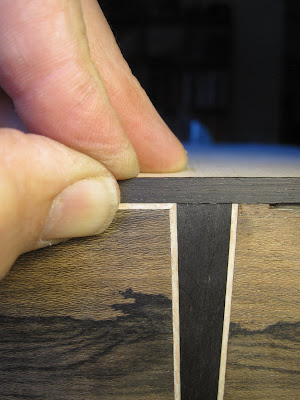 because she knows I can do things like this... 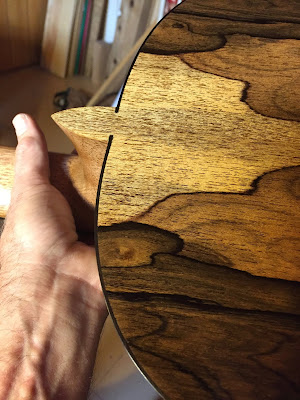 I doff my hat to those of you who cut and fit dovetails and pins on a daily basis and do it well!