Showing posts from November, 2021
Show all 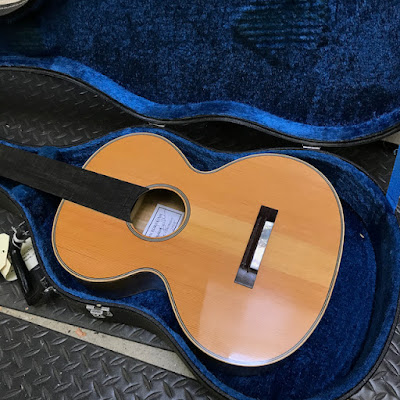 I made this little guitar about ten years ago, it is based upon an original 1830's "Legnani Model" guitar made in the René Lacôte Paris workshop. Luigi Legnani was a popular European guitar virtuoso and composer in the 1800's, both René Lacôte and Johann Stauffer made guitars for Legnani to his specifications. My little guitar started out with a Douglas fir top, California laurel back and sides, with a simple bridge made from a block of East Indian rosewood. When I glued the bridge on I discovered that I had the angle of the neck set wrong, the bridge ended up being way too tall for the guitar and the Douglas fir top was too thick and heavy to produce a decent tone, it sounded like it was being played underwater. I put the guitar into a case and tucked it away. December of 2020 I pulled it out from the closet so I could practice on it, I had a full size classical guitar in the shop that needed a new top, and I wanted to try a new way of removing guitar tops. Here'
Post a Comment
Read more
More posts