Well now, in any case, I hope you enjoy these songs, they are, like you and me, product[s] of a long, long human chain, and even the strangest ones are distantly related to each other, as are we all. And there be many links to come. 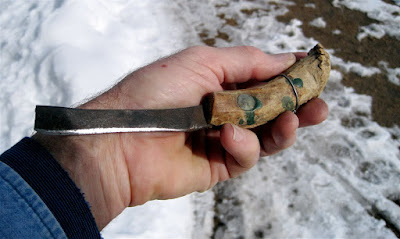 If you have read A Handmade Life by Bill Cooperthwaite, you might have come across the short section where he describes a knife maker who makes crooked knives from store bought knives. The maker shapes the knife with files and then goes to an anvil and proceeds to cold bend the "crook" in the knife with a hammer. I thought I'd give it a try. In the above photo is an old hoof knife that belonged to my grandfather, at some point in its life the hook at the end got broken off. It's a perfect candidate for this project. 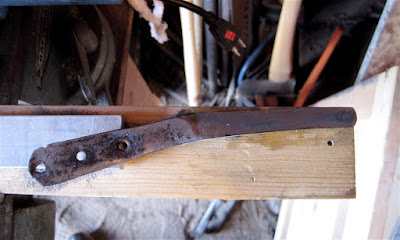 I spent almost 2 hours drawing filing the knife to the shape I wanted and putting a proper bevel on it. Then I went after it with an India stone. 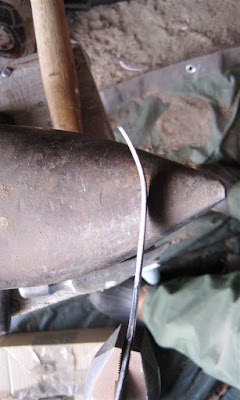 Here is the knife with the start of the bend, I couldn't find my two and a half pound rounding hammer that I used when I was a horseshoer, so I grabbed an old framing hammer to do the work. The bending went easier then I expected and at the point I began to fear that the steel was too soft, it might not hold an edge. 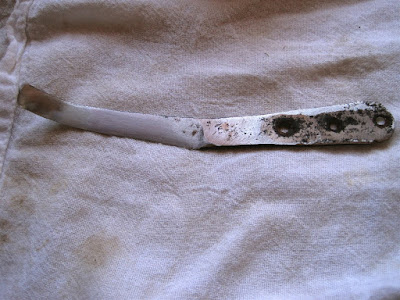 Here is the spoon knife with the final bend and some finish work done with wet/dry sandpaper. As I feared, the knife won't hold an edge, I am going to have to make a soft fire brick forge and do some heat treating. Wow, that can be another post!
at October 30, 2011 No comments:

There seems to be no doubt that bindings-or what holds the feet to the snowshoes-are the most controversial part of the whole apparatus of snowshoeing. 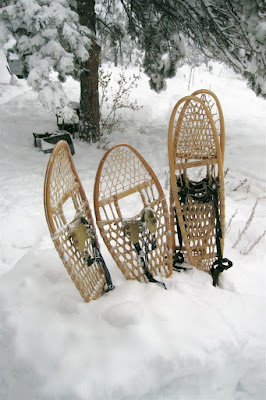 16 inches of snow at 5am and an inch fell in the hour that I took the dogs for a walk this morning at 7am. Josey is bugging me to go out and play in the snow as I write, I guess I should strap on the old Indian webs.

The snowshoes on the left are the Huron/Maine/Michigan style, as you can tell they are claimed by several different groups of people and the ones on the right are the Alaskan style. The Huron pair I bought 15 years ago and the Alaskan pair my wife got me 13 years ago, I've used them every winter when we've gotten snow. Many people think that these old styles webs don't work in the snow anymore, they say that only modern snow shoes give the best flotation. I disagree, I have snowshoed with people who used the modern shoes, they "post holed" through the snow and I skimmed along the surface. It's hard to beat 6,000 year old or more technology. Snowshoes, or Indian webs as the old timers called them when I was a kid back in the 1960's, were the mainstay of folks who lived were it snowed until the 1930's when the first skiing craze really began. My great uncle told me that when he was 12 in 1912, there was a Swedish immigrant who worked at a nearby sawmill who made skis, or snowshoes as they were called then, for all the kids in the community and sold them to adults. My uncle told me that he got good enough on the "snowshoes" that he could jump logs and fly over 20 feet! He owned a pair of Indian webs to walk the trap line the he operated along Battle and Panther Creeks. 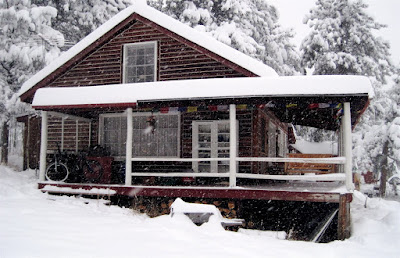 I should have titled this blog, Why Woodwork When You Can Snowhoe. The National Weather Service is forecasting an additional 7 to 11 inches of snow today, gotta love a Winter Storm Warning.
at October 26, 2011 No comments:

You compose because you want to somehow summarize in some permanent form your most basic feelings about being alive, to set down... some sort of permanent statement about the way it feels to live now, today.

Got back on Saturday, 10/22, from a 3 day class in Historic Building Structural Assessment at Colorado Mountain College in Leadville. We crawled through 4 buildings in town, the National Mining Hall of Fame and Museum, St. George's Episcopal Church, the 6th Street Gym and the Horace and Augusta Tabor House, assessing the buildings for further preservation work. With this knowledge we are to complete a Historic Building Assessment, a document which is used in Colorado to get grants from the Colorado Historic Fund to preserve the building. 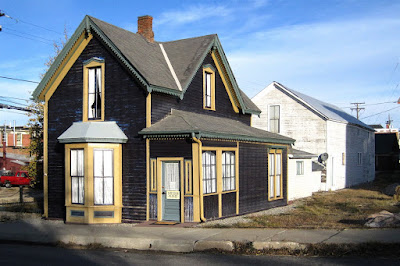 For those of you who don't know, Leadville was the "Silver Queen", millions of dollars in silver were pulled out from the veins underneath the town from 1877 until 1893 when the Sherman Act caused silver prices to crash. Horace Tabor made some of those millions through lucky acts, one was to grubstake to miners who struck a large vein and the other was purchasing the Matchless Mine. That mine was salted (high grade ore was put in the shaft to make it look like it had good ore) and Tabor quickly found that out, but had his crew continue the digging and 20 feet later struck one of the biggest veins in Leadville. His first wife, Augusta, was considered to be an austere woman, she did not allow Tabor to build her a big house. They lived in this until they moved to Denver in 1881. To find out what happened to HAW Tabor, visit the website on Baby Doe Tabor. 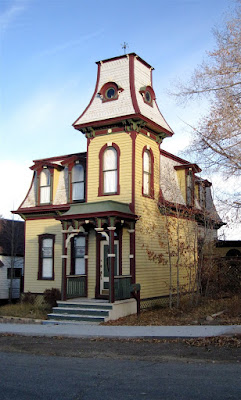 George King was an architect who lived in Leadville during its boom days and among others, designed this house, the Tabor Hotel and the Delaware Hotel in Leadville, plus houses in Boulder, Colorado. 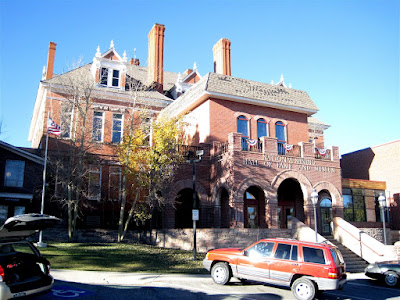 The Mining Museum is housed in 3 buildings, the original Leadville High School, built in 1899, then another was added on to it in the 1940's and then in the 1950's and all of it was abandoned in the late 1960's. It is quite the site to explore, especially the attic of the original 1899 building. By the way, all the exterior trim that you see on the 1899 building, the Victorian part, is made from tin.
at October 25, 2011 No comments:

Returning from his wartime duty in England, one Montanan watched as his ship approached New York.
"Just think," the guy next to him said, "somewhere in those canyons you can find anything you want."
"Yeah," the Montanan said. "Show me where I can go shoot an elk."

Edmund Christopherson, This Here is Montana, 1961 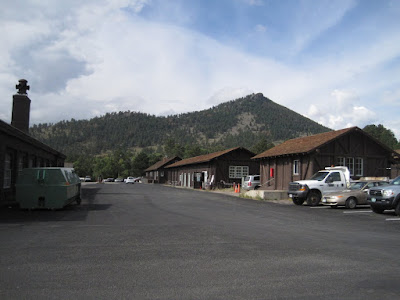 This is the view outside the Projects Administration Shop where I worked this summer at Rocky Mountain National Park (ROMO). Not a bad view. 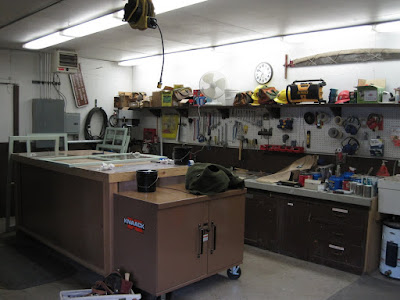 Here's a view of the inside of the shop, it's quite cramped and tiny compared to what I worked in at Yosemite. 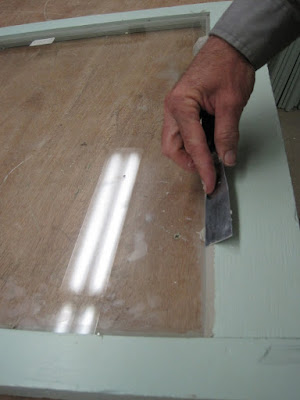 I am a specialist in repair work on historic windows, my dad taught me how to glaze a window when I was a teenager in the 1970's and got really good when I worked at Lassen Volcanic National Park. At Lassen I restored windows and built new sashes, the same at Yosemite where I lost count of how many windows I repaired, built and glazed. For some reason this summer at ROMO we had a lot of windows to repair and re-glazed, I worked on the windows at the historic assistant superintendent's house and then all these storm windows. 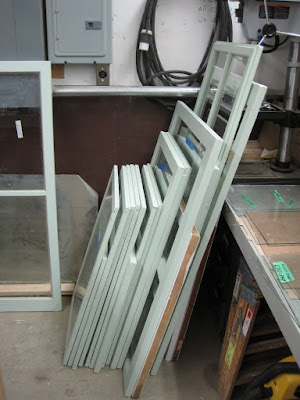 I put glass lights in and glazed 13 windows the day I took these photos, it was a lot of work!
at October 16, 2011 No comments:

The things we truly love stay with us always, locked in our hearts as long as life remains. You can take the boy out of the mountains, but you can't take the mountains out of the boy. I can think of only a few times in my life when I didn't split any firewood in the fall, to split wood is such a part of my life I miss it when I don't do it. Split wood, carry water, the only 2 things one really needs to do with his/her life.

This dead Douglas fir was behind our house, the National Weather Service is calling for snow on Saturday, it would be nice to have a fire in the fireplace to enjoy watching the snow fall. That's Rufus, our wonder dog, sniffing the wood. 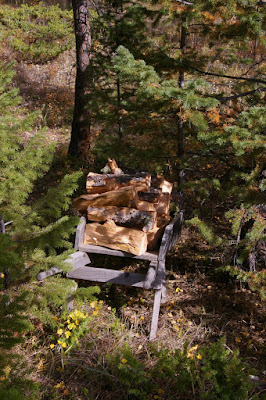 This is my mule. The wheel came from a wheel barrow that my grandfather made years ago, the handles were made in 1975 by me, my mom and my brother when Mom decided to re-build the barrow. I rebuilt the barrow about 4 years ago when we were at Cedar Grove, the handles and wheel I kept, but the box is made from some ponderosa pine that I milled with a chainsaw. 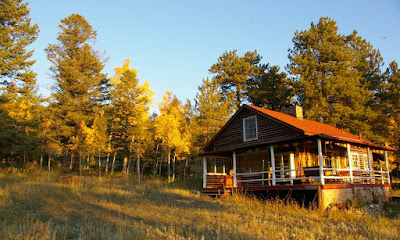 Our house basking in the light from sunrise. The aspen are still turning golds and reds, yes, reds, something you don't see here that often. 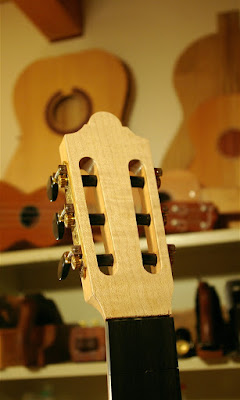 Got some Sloane tuners yesterday for a guitar that is going to a man in Sedona. My, oh my, those tuners sure are pretty, for $250 they should be.

Hey, every one! Go to the Wall Street Journal website and check how Gibson Guitars got busted for "illegal" wood. It won't be long before every guitar will be made out of carbon/graphite! I'd supply the link, but I am still figuring out Blogger because I don't have the hours and hours to spend learning all its quirks! I've got guitars to make!
at October 06, 2011 No comments:

Man has made many machines, complex and cunning, but which of them indeed rivals the workings of his heart? 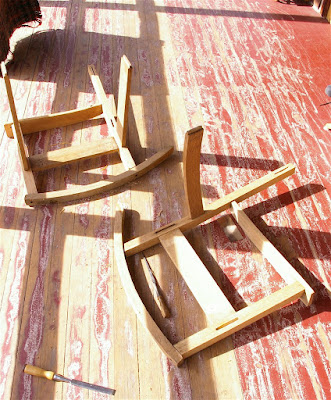 There are people who think that when someone is unemployed, or in my case, on furlough, they have nothing to do. Monday, I felled a Douglas fir for firewood, yesterday was spent making a guitar bridge from ebony for a WRC/Maple guitar that I need to complete by November and today I hauled firewood and cut out a door on the garage. I know that is not the point of this blog, it is about a Craftsman style rocker that once belonged to my great aunt and uncle. In this photo you can see that I have glued the rails into their mortises. All the joints have been cleaned and I used "Tite Bond II" brand glue for the job. I had to take some time to figure out how to glue the 2 halves together, I did one dry run before I poured the glue. 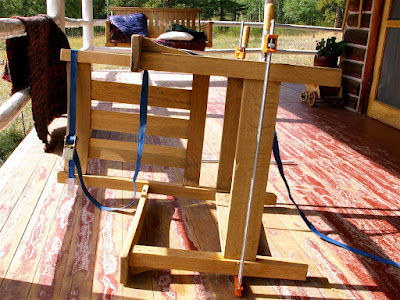 Thank goodness for ratchet straps! I don't own enough long Pony clamps for this job so had to resort this this solution. I needed to glue up the halves in such a way that all the glue stayed in the mortises, I had some run out, but not much. 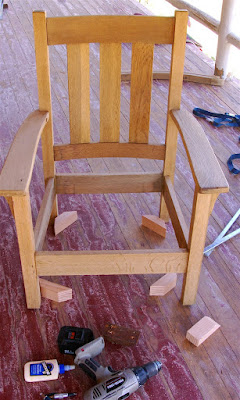 This shot shows that I am ready to put in the corner blocks to help hold the chair together (there are no pegs or other fasteners in the joints) and support the cushion. I didn't have time to put any stain or finish on the chair before it went off to the upholsterer.