Showing posts from February, 2009
Show all

How to Lift a House 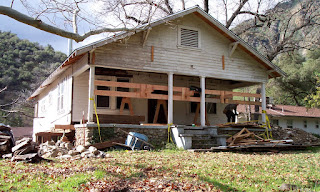 Here we are, once again at #705 in El Portal. This is the formal entrance of the building, one corner of the house is pretty much rotted and Derek and I needed a way to suspend this side of the house while we dug a trench to pour a footer. We knew that we needed to sling the rim joist, but how to hold the beam that would carry the chain hoists and a come-along. One of the guys at work suggested that we use A-frames to hold a beam. I really liked the idea and built them. The middle beam sports a 2-ton come-along where we have slung the cable through the sling to double its lifting capacity, the other two beams have 3/4 ton chain hoists attached to the sling. The slings wrap around the rim joist and I had Derek ratchet the hoists as much as he could, we were able to put a half inch crown in the middle of the joist. This is Derek, the man with no face. He leaves next week to go work for the US Forest Service to be a firefighter, I wish him good luck. This photo shows you how we
Post a Comment
Read more
More posts