Showing posts from March, 2013
Show all

Julia's Guitar, A Copy of a 1933 Santos Hernandez Guitar 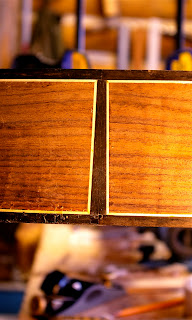 I started back at my regular day job 2 weeks ago, I've spent it working on the flat lands at Walden Ponds . As I say, any time I spend away from the mountains is time wasted. I finally got a chance to finish binding Julia's guitar, a copy of a guitar made by Santos Hernandez in 1933. I did some research on the internet looking for images of guitars that he made after 1921 and before his death in 1943 to get a better idea of how he "trimmed" out a guitar. Here is my interpretation of what I learned. On some of his guitars Santos used a very wide maple purfling. This makes for a very bold look. He also made a heel cap from the same wood as the bindings. I used ebony bindings on this guitar and used ebony and maple for the heel cap to make the binding theme. A photo of gluing on the heel cap. You would be surprised at the amount of stress a guitar receives while it is being made! It gets all covered with glue, my hand slips when the binding tape bre
6 comments
Read more 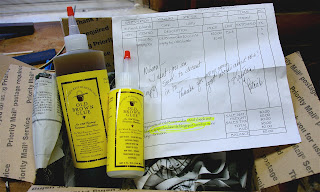 Manner is personality—the outward manifestation of one’s innate character and attitude toward life. Emily Post Remember how your parents always told you (and if they didn't they should have!) "If you can't say anything nice don't say anything at all!" I was also told to be sure to tell other people about the good things that someone has done to you. Yesterday, I received a complimentary 20oz. bottle of Old Brown Glue from Patrick Edwards! Thank you Mr. Edwards! It is the best hide glue on the market! To make your own hide glue click here for Stewart-MacDonald's video. 20 ounces of hide glue! Wow! What will I ever do with it?! My order from Luthiers Mercantile Inc , micro pipettes, mother of pearl overlays, Dr. Duck's Axe Wax and blonde shellac. Though it doesn't stand out, the three white pieces against the bag of shellac are mother of pearl tie block overlays. One of them I will use on the bridge for Julia's guitar. I ma
3 comments
Read more

I just have to share these videos! These guys are amazing! It brings back many memories of the horses I put shoes on and all the forge work I did. In the Eagle Eye competition you get to see these guys forge weld, I did that, too! Wow, it is something for me to think about, I could do everything that you see in these videos. I was a professional horseshoer in another life, I am a graduate of the Horseshoeing School at Montana State University and I was certified by the American Farriers Association. What different paths we follow in our lives!
2 comments
Read more 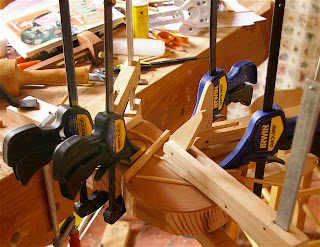 Today, W. Patrick Edwards, the maker of Old Brown Glue, left a comment on an earlier post, Guitars, Ukuleles and Old Brown Glue that gave me a bit of an education on Old Brown Glue . If you look real hard you can see the bottle of Old Brown Glue sitting in the background on my bench. This is what he said: I just discovered this post. I make Old Brown Glue and keep a sample bottle of each batch to test the shelf life. My shelf life testing is at room temperature, here in San Diego, where it is often hot. Naturally, storing in a refrigerator extends the shelf life. We put a shelf life on each batch and keep records of each sale. We conservatively put a date of 18 months from the date of manufacture. Our testing indicates it has a longer shelf life than that. Wilson bought batch 149. According to the printed shelf life date, it was technically out of date. However, my test bottle of 149 is still good, and it has been sitting at room temperature. The glue is supposed to have
7 comments
Read more 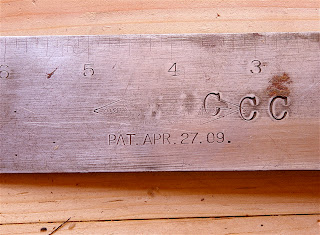 The woodcraft way is the simple way. Few tools, and simple tools, supplemented by a helpful gadget or two fashioned in the woods, plus a little ingenuity. Bernard S. Mason, Woodcraft , 1973 I found this square in a dumpster while working at a national park that hosted a CCC ( Civil Conservation Corps ) camp during the Great Depression. I was shocked that someone threw it away, but happy that I came along to rescue it. I don't use it much, I keep it more out of nostalgia. I knew men who had served in the 3C's, as they called it, and all talked about how it changed their lives for the better. It's a Stiletto square, and Stiletto Tool Company (originally called Baker&Hamilton) was highly regarded by all the old timers that I grew up with. Other than the high quality of tools that Baker&Hamilton produced, those old men like the company because the tools were made in San Francisco, not somewhere "back east". That was a term of derision used by tho
4 comments
Read more

One Reason Not To Have A Tool Chest In A Small Shop! 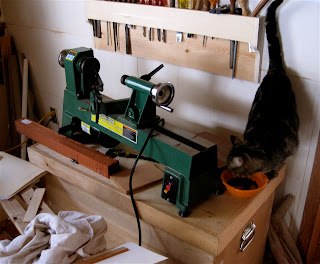 Tool chests are an obvious convenience, and are usually made by the workmen in all trades for convenience in storing their tools. Bernard E. Jones, The Practical Woodworker, 190? The best reason not to have a tool chest in a small shop is that is quickly becomes counter space! Though it is nice just to walk over to the cool new lathe that I own and turn a tool handle or something on it real quick. Click here to see what I want to build (with modifications, I don't need the vise!) to replace this tool chest.
6 comments
Read more

Making a Copy of a 1933 Santos Hernandez Guitar 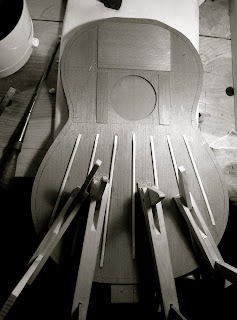 In all glueing operations remember to "hasten slowly". George Ellis, Modern Practical Joinery , 1902 Last month, a young classical guitarist asked me to make her a guitar that she could play, comfortably. She has very tiny hands and can hardly play the 650mm string length classical guitar that she owns. I handed her a metric ruler and asked her to measure from the tip of her outstretched left hand little finger to the tip of her outstretched left hand thumb. The distance was 190mm. The same distance on my left hand is 235mm. What that means is that she should be playing on a guitar that has a 630-635mm and I should be playing a 650mm, not a 665mm. We decided that she should have a 635mm string length guitar. I chose the Santos Hernandez pattern, it is an elegant outline and Hernandez did make the 1912 Ramirez guitar that made Andres Segovia famous. Following the original plantilla, I reduced the guitar's body size to what is considered a small box, around 470mm in
7 comments
Read more
More posts