1: to furnish (something, such as a computer, airplane, or building) with new or modified parts or equipment not available or considered necessary at the time of manufacture

2: to install (new or modified parts or equipment) in something previously manufactured or constructed

3: to adapt to a new purpose or need 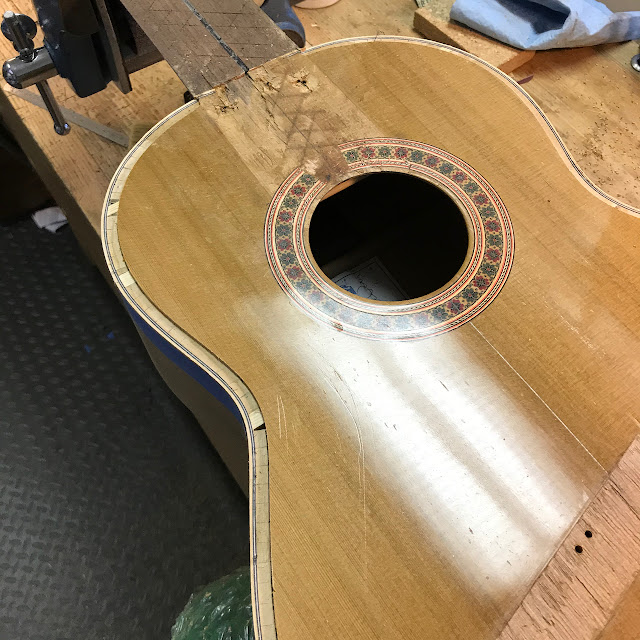 Routing the edges of the sound board in order to remove the top.
Three years ago, I made my first "Brahms" guitar. A "Brahms" guitar is a classical guitar that has an extra bass string, usually tuned to the second "B" below middle "C", and an extra treble string that is tuned to the "A" above middle "C", giving the guitar eight strings. These extra strings extend the musical range of a classical guitar. 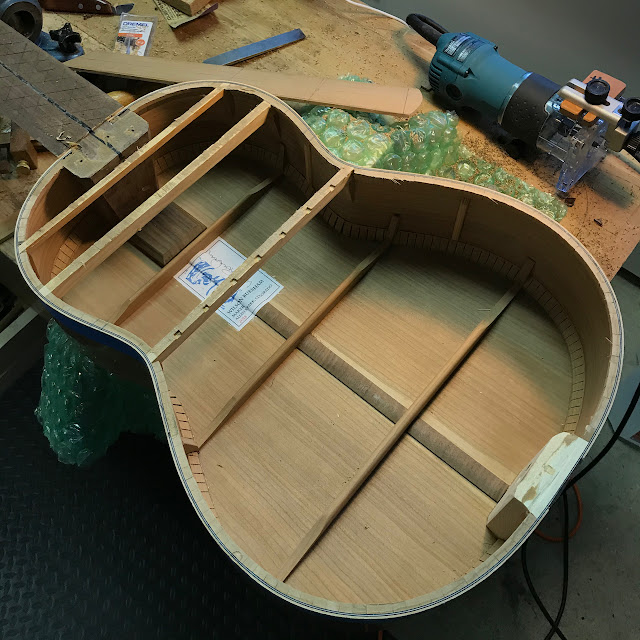 Top removed.
The problem with adding those two extra strings is that they increased tension and torque to the guitar's top. This guitar started to collapse at the sound hole end of the fret board making the string action too high for easy playing. 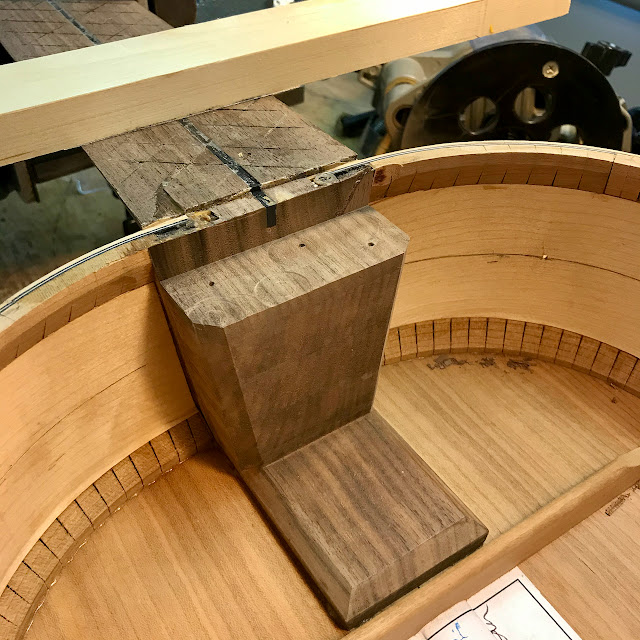 Shelf cut for neck extension.
The owner brought the guitar back into the shop for me to repair it and I realized I needed to add an extension to the neck to support the fret board. Another thing I decided to do was not use a traditionally placed sound hole in the top, which is located at the very end of the fret board. 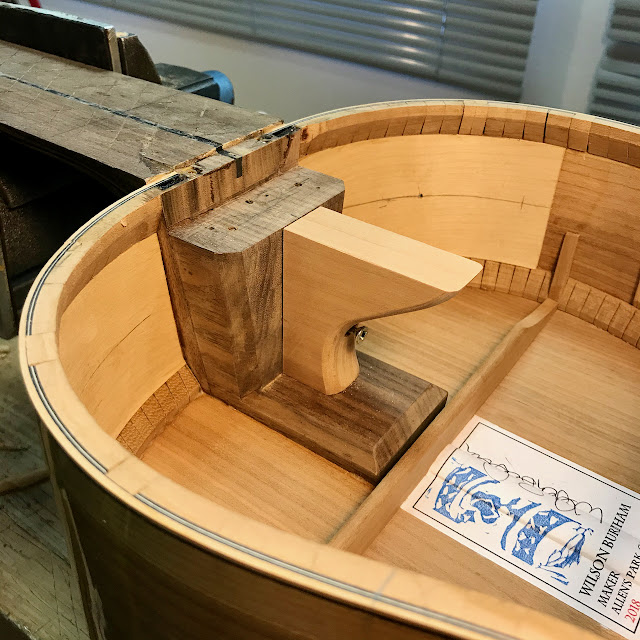 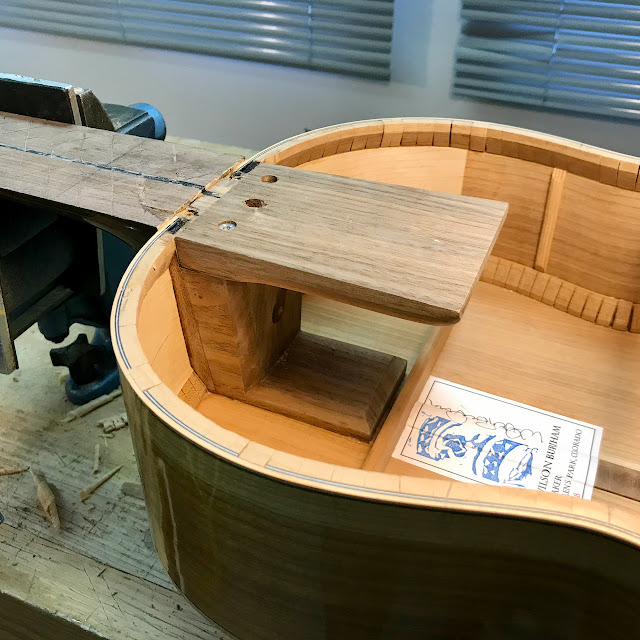 The neck extension was glued and screwed to the neck block along with the bracket that supports it. 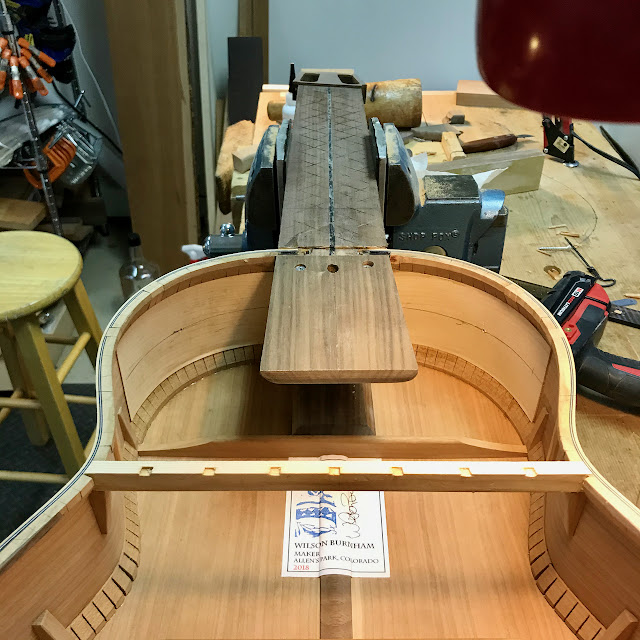 I kept the harmonic bar attached to the sides for as long as I could, it helps maintain the shape of the guitar. 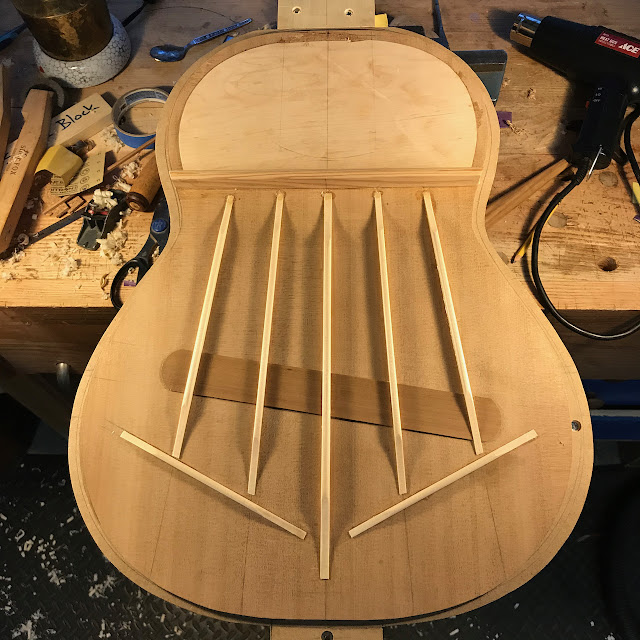 I added a pice of maple veneer to the upper part of the sound board with the hope that it will help keep the cedar top from cracking. 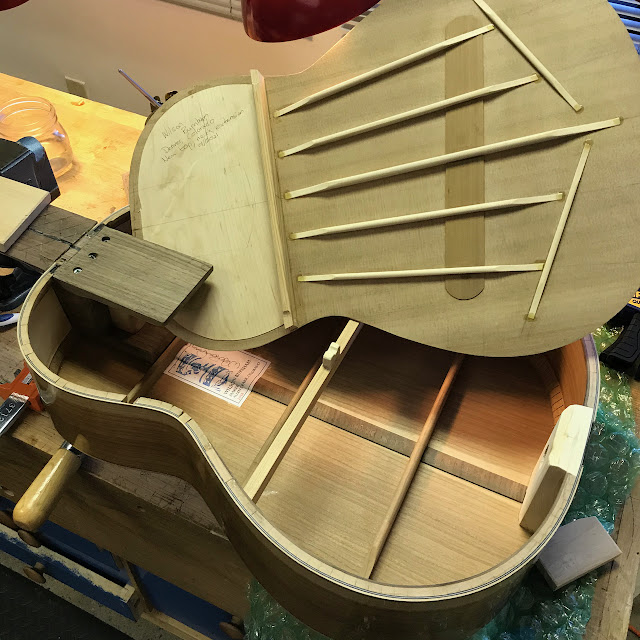 If you look close you will see the "floating brace" that is near the position of the original harmonic bar. This will help keep the top from collapsing in front of the bridge and it can increase the tonal qualities of the guitar. 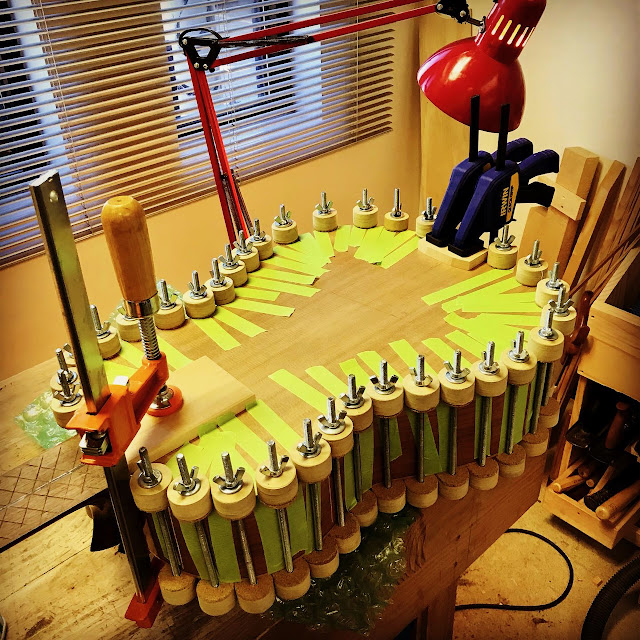 The top is glued on! 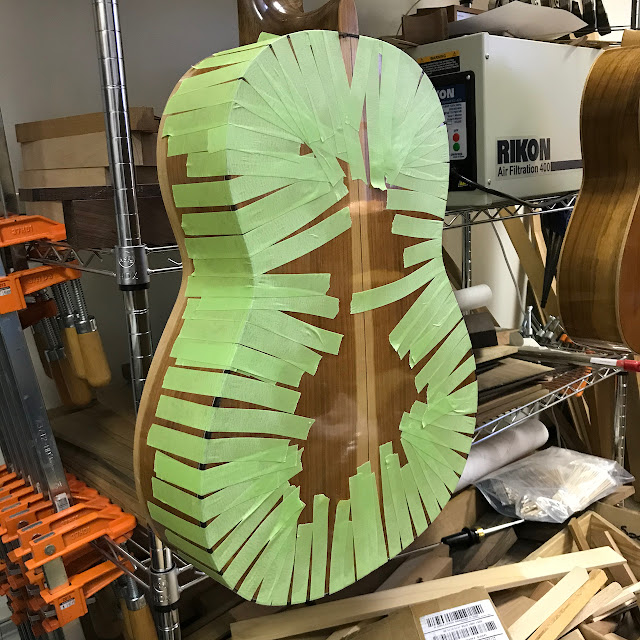 Since the owner has ordered and bought three other classical guitars from me, and is a good friend, I decided to upgrade the bindings on the guitar. Originally they were cherry, to match the back and sides, but to honor what this guitar has been through I am using ebony. 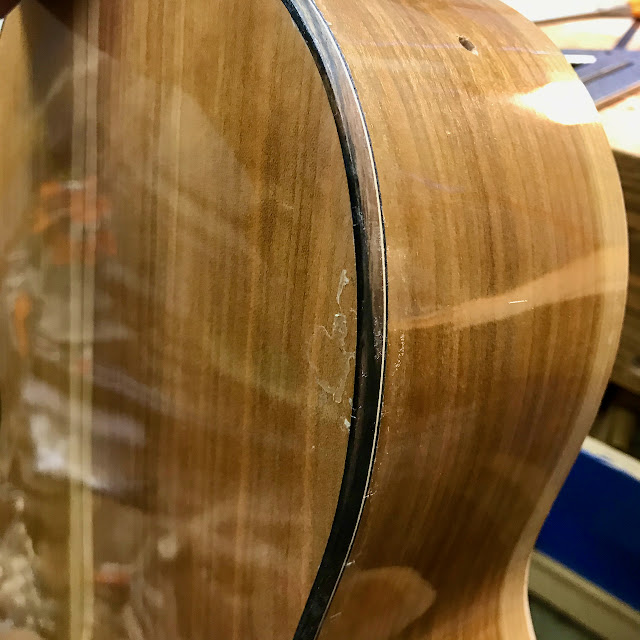 The ebony goes well with the cherry.

I still have to install the ebony bindings and black/white purflings on the top, I need to make and install a new fret board, a bridge, and basically French polish the entire guitar again. It's a lot of work for a prototype, it will be worth working out all the bugs to make future "Brahms" guitars better.

After installing the new redwood top and re-glueing the fret board extension on the 1991 Manuel Contreras guitar, it was time to make a new bridge. 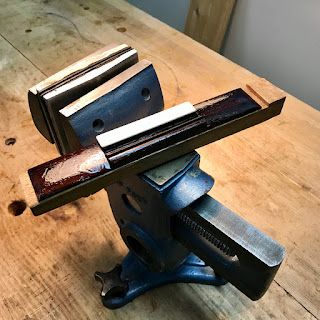 I chose a nice piece of East Indian rosewood from my stock and ripped out a piece. I made the bridge to be a very close copy of the original Contreras bridge, a large tie block with a deep valley between the block and saddle slot, the owner wanted a piece of bone to top the tie block. 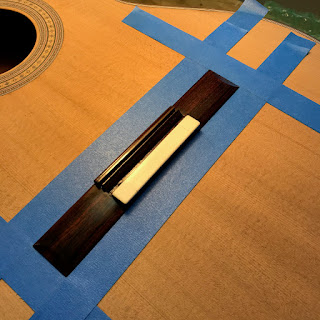 I prefer to install the bridge before I apply any finish to the top, it is easier for me to clean off any glue squeeze out, there is less damage to the finish if I do it that way. 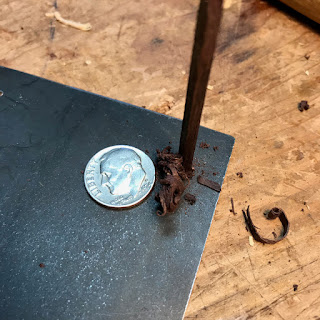 Once the bridge is properly located, I made locating pins from a sliver of rosewood. 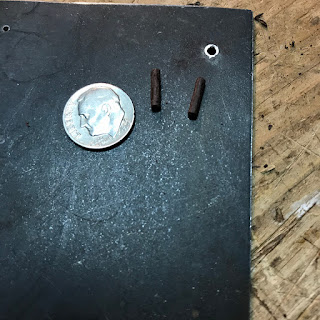 Making these pins is a fun task! 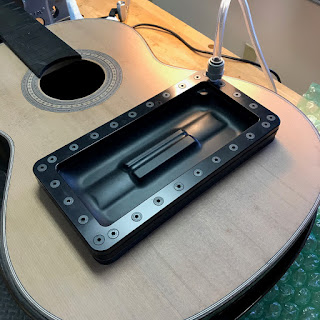 Several years ago, I purchased a vacuum pump and vacuum clamp for glueing the bridge, both items were well worth the money. No longer do I have to fuss with clamps and worry about the risk of a bad glue-up! 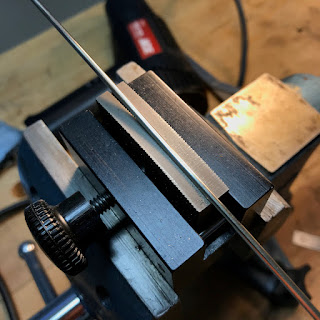 Once the bridge is glued on, I can shape the fret board to optimum geometry for a proper string action, which means the guitar will be easy to play. This is a fret barber, its purpose is to thin the tang of the fret wire that I install. If the tang is too wide for the fret and I hammer it into the slot, the extra width will eventually force the neck into a back bow. 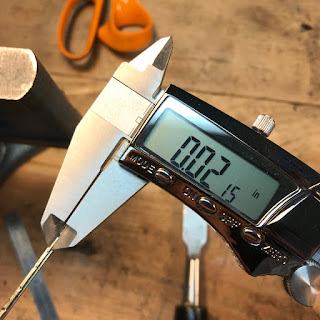 The fret slots are .023" wide, the fret tangs are .035" wide, you can see how quickly that extra width will force the ebony to move, giving the neck a "back bow", or a crown in the middle of the fret board. 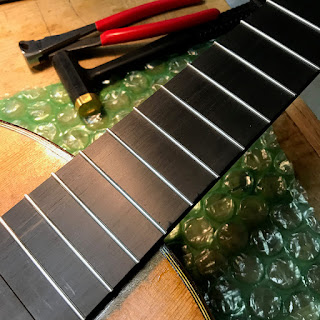 After the frets are hammered in I glued them in place with thin CA glue. 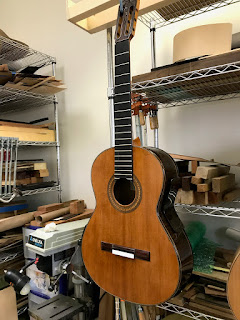 Here is a photo of the guitar with a sealer coat of "ruby" shellac.
I haven't put strings on the guitar yet, I want to complete the French polish on the top and finish cleaning and polishing the original lacquer on the back and sides.
Stay tuned for the next post about this project!
at January 07, 2021 No comments: