Paul Bunyan, Logging and Model Trains: Things That I Forgot Are Important

February 08, 2014
Paul Bunyan! the mightiest man that ever came into the woods! Never do woodsmen tire of hearing of him. Never do the stories of his tremendous labors grow old to them, for not only was he the first one of all their kind, but he was also the greatest lumberjack that ever lived, the hero of them all.


A couple of weeks I had a few bad days in the shop, mostly having fits over my French polish technique or maybe it was the shellac I was having problems with, I don't know. I walked away from the bench, sat down, glanced at a bookcase and my eyes fell on my collection of books about Paul Bunyan. Then I remembered what is important - family, stories and hobbies. 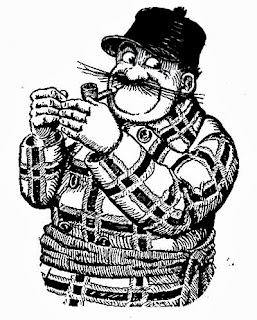 Paul Bunyan was a hero of mine since I was a little kid, when you grow up in a family of storytellers who simply told about the things that they did in everyday life - ranching, logging, mining - the exploits of Paul Bunyan aren't that far-fetched. The West is a big place and you compare everything else in the world to it, many places pale to the wonders that lay West of the 100th meridian. 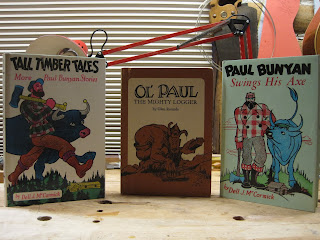 About 20 years ago I started collecting all the books on Paul Bunyan that I could lay my hands on: W.B. Laughead's original stories; James Steven's colossal whopper of a tail; Ida Virginia Turney whacked out vignettes; Wallace Wadsworth's decent retelling; but my favorites are those by Dell Lomax, Glen Rounds and Louis Untermeyer. There are several other authors whose works I need to add to my collection, I don't know their stories are original or just rehashing of what W.B. Laughead wrote back in 1914, but that is why you collect, to learn.

This past Christmas, my wife got me a HO scale model train of the Durango & Silverton line. I never had a model railroad when I was a kid, my brother got a Marx G scale train one Christmas and he rarely let me play with it. It was a delight to have my own model train. This, of course, has started me down a slippery path - model railroading. 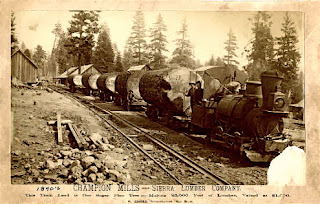 This is a photo of "Paul Dean", the first 0-4-0 locomotive purchased by the Sierra Flume and Lumber Company from the Union Iron Works in San Francisco, California, and was later converted into a 0-6-0 locomotive. This meter gauge locomotive operated only 9 miles from where I grew up in northeastern California. Now I want to make a logging railroad layout of the line from Yellow Jacket to Lyonsville. 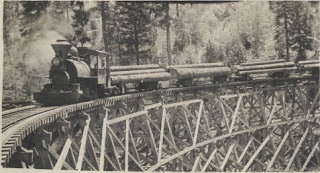 This is "Uncle Sam", Engine No. 3 bring in a load of logs to Lyonsville. It was a 0-6-0 saddle tank locomotive also built by the Union Iron Works. There is a photo of this engine in the my grandparents' photo collection. If you go online to the CSU Chico Digital Collections and search for Sierra Lumber Company you can see more photos of the logging railroads from my neck of the woods.

The logging industry put food on our table and me through college, my dad was a mill wright. He worked for Diamond International (remember Diamond Matches?) in Red Bluff, California, then went to Kimberly-Clark and retired with Simpson Paper, both plants were in Anderson, California. 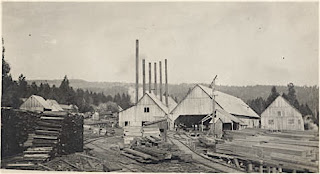 This is the Champion Mill at Lyonsville, California. My grandfather, along with several other relatives, worked at this mill. My great uncle Frank Black told us a story about when he was a kid, he and some friends loosen the brakes on the log cars and watched them crash into the mill. I don't remember if they got caught, but the mill foreman had an idea who did it. 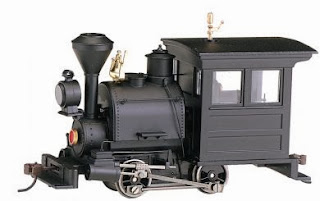 This is a Spectrum On30 Scale Steam 0-4-0 Porter locomotive that I want to buy. It's a close match to the "Paul Dean". I'll get this, a couple of log cars and a Dolbeer "Donkey" log skidder to start my logging railroad layout. The Model Railroader's Guide to Logging Railroads is on its way to my mail box. It is either this or building muzzleloading rifles.

Enjoy this YouTube from the Greeley Freight Station Museum!