February 21, 2014
Bench Stop: A wood or metal pillar which projects above the surface of the Bench against which the workpiece is held when being planed.


As some of you know, my workbench is based upon the bench in Roy Underhill's book, The Woodwright's Apprentice. When I built it 20 years ago, I didn't want to use the bench stop that Roy used, I knew I would be planing fairly wide wood and at the time, such a small stop, or bench dog, didn't make much sense to me. 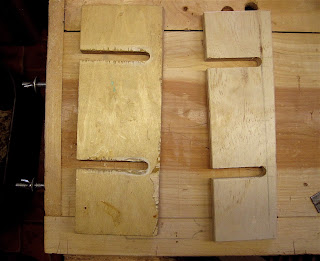 At the time, I owned an issue of a now defunct wood working magazine that had an article on bench accessories, and this wide stop was part of the article. I think I used a nice piece of ponderosa pine for the first one, then I replaced that with a chunk of red oak. When that broke I made a stop from a scrap of 10 ply plywood that was left at a new home construction site that I was working at. 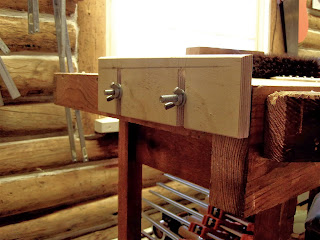 Fifteen years or so later, I finally decided to replace that piece of plywood with another scrap piece.

May it last fifteen years.