I misspoke on my last posting, this is my 200th post! I don't know if I should be excited or not! I will say it is appropriate that I talk about a success, my Krenov style hand plane does work. 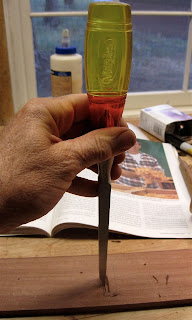 I used a mortise chisel to cut out the mouth opening on the sole. 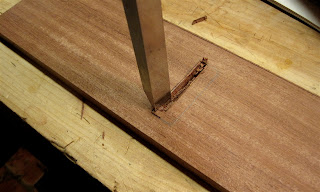 The chisel made fast work of the opening. 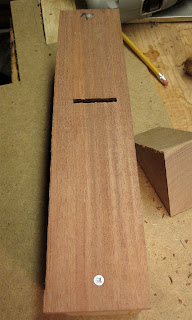 I decided that it would be better to index the sole to the plane with screws instead of dowels. As I mentioned in an early posting, the dowel I used was a little smaller than the drill bit! 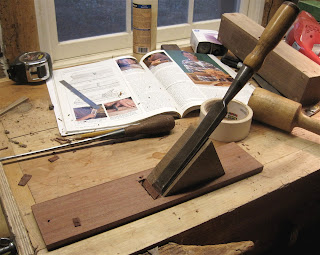 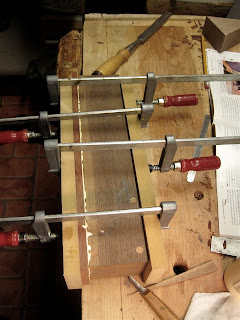 The sole is glued on! 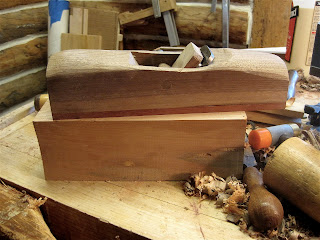 I used a drawknife and a spoke shave to do some basic shaping of the plane body, no bandsaw needed! I spent about 2 hours finessing the mouth opening and trying to flatten the sole. For some reason, I had difficulties in truly flattening the sole on my plate glass sanding board, I would remove too much from the toe of the sole. I applied downward pressure several different ways to correct for that, I ended up using a scraper to hollow out areas of the sole. That allowed the sole to sit flat on the sanding board. 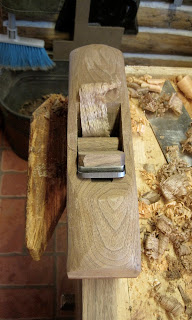 As you can see, I got the plane to work, though I need to tweak it some more and properly sharpen the plane iron.

I have made smaller planes, including little tiny thumb planes, using Irving Sloane's construction method, which can be found in Steel String Guitar Construction, and making a Krenov style plane is no different. You must have a flat bed for the plane iron, the plane's sole must be flat and the mouth must have the proper opening.

If you make this plane from Finck's book, I recommend that you make the brass plane hammer right after you have glued on the plane's sides. Having that hammer to adjust the plane iron sure is handy, I used my fret hammer, which I shouldn't have because it is only for installing frets, so I will either make a hammer or buy one from Lee Valley.

I ordered three plane irons with chip breakers from Hock Tools, they were three and one half inches long and I used one of them to make this plane. I am going to contact Hock Tools to see if I can exchange the other two blades for four and one half inch long blades. In making this plane, I discovered that I am more old fashioned than I thought, I want to see some steel sticking up above the plane body. If you look at that famous cocobolo smoothing plane that Krenov made, you will see that he used a standard block plane iron. I measured the length of the iron from my Stanley No. 60 and 1/2 low angle plane and found it is just over four and one quarter inches long. I really like the looks of that little plane and would like to make a close copy of it. Someday.

The plane is completed and now I need to turn my attention to French polish work on several guitars.


To conclude, all I will say is

"Get out to the shop and making something! Stop surfing the internet and get busy!"