A Visit With Tico Vogt

Man has an affinity for wood. 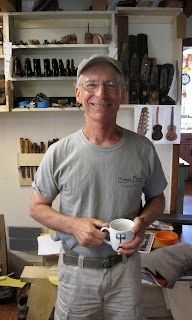 A month ago my wife and I were honored with a visit from Tico Vogt ! Tico is a one of the most wonderful people I have ever met and he just happens to be a great wood worker!

Tico first left a comment on my blog four years ago asking me if we Westerners really do burn pine for fire wood. I told him that most of us do because conifers are far more prevalent than hardwoods here in the West. Since that first comment Tico has always sent me an encouraging comment about whatever I am working on at the moment. I have discovered that he encourages many other bloggers in their endeavors.

Tico drove up to our house from Boulder, Colorado, where he, his wife and daughter were visiting his son who lives in Boulder. Tico had written to me before that whenever he was in Boulder he was going to see me and my workshop. So he did! He was a little late getting to our place, he said he stopped four times will driving up the St. Vrain canyon to take pictures. It is a beautiful drive!

Amanda, I and Tico talked about so many things during his visit that I can't remember them all, I do remember that we talked about how beautiful it is here in this part of Colorado; where to go hiking around; Ron Brese's new plane, the Big Brute, that he made especially to be used with Tico's Superchute; the best trees for firewood; his family and home; our family and home; and of course, woodworking. 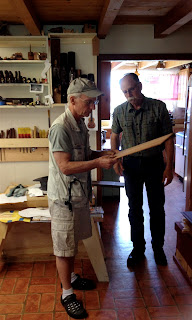 Tico really wanted to see my workshop, what woodworker doesn't want a peek in somebody else's shop, and like most people who see it he was impressed that my wife lets me have it inside our house. I don't use power tools to make a guitar, so she allows me to stay. Here in this photo, I am showing Tico some redwood tops that I had just received from Luthiers Mercantile Inc in Healdsburg, California. After looking around the shop he asked me where my clamps were. I pointed to the dozen and a half hanging on the wall. "Wow, you don't have any clamps!" he exclaimed, "I have so many and I rely upon them a great deal". I told him that's the beauty of being a guitar maker, you don't need too many clamps! 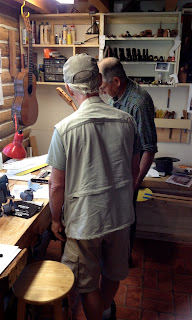 In this photo I am showing him a guitar I made with a Douglas fir top and mahogany back and sides. I think we were talking about finishes and french polishing. 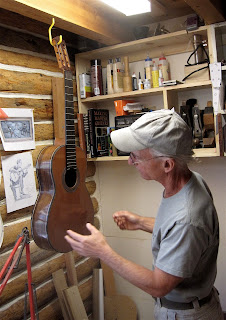 Tico thought I did a great job French polishing Julia's 1933 Santos Hernandez guitar. I mentioned that I wanted to do about three more sessions, he thought I was a little silly to keep going. He was right. 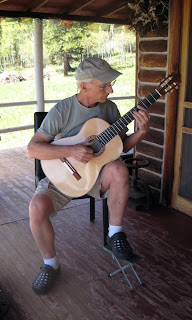 "This is quite the box, you got here, Wilson! This is a wonderful guitar! It is well balanced with a nice separation of notes." That is what he said after he played guitar #5 for awhile. Tico is quite a good player, I must say. He has a solid technique both right and left hand and I was quite impressed on how well he sits while holding a guitar. I taught classical guitar twenty years ago, he would have been a fun student for me back then! When I mentioned that he held the guitar well, he said that he had back problems and that the book, The Natural Classical Guitar, by Lee Ryan, helped him immensely. 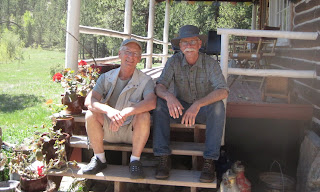 What a visit! Unfortunately it ended all too soon and Tico drove back to Boulder and the cabin they had rented at Chautauqua. Amanda and I have a standing invitation to visit Tico and his workshop outside of Saratoga, New York, we can't wait to go and see him!

The internet and blogging can be a wonderful thing, because of this little thread in cyberspace I was able to meet a wonderful person. I urge other bloggers to follow Tico's example by getting out and personally meeting other wood workers, musicians, artists, anyone that you correspond with via the internet.