December 03, 2012
Deal-
The term is used of fir and pine loosely. White deal is the wood of the Norway Spruce, Red Deal that of the Scotch Pine, Yellow deal that of the yellow pine; but much depends upon local custom, red and yellow deal often being the same wood, Pinus slyvestris.


I've been meaning to post some photos of tools that I acquired at meetings of the Rocky Mountain Tool Collectors. 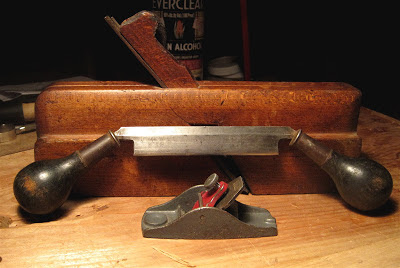 A stick and rebate plane, a small drawknife and a small Stanley plane. 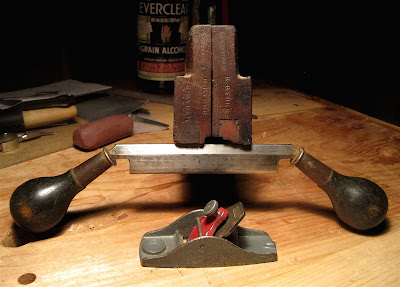 I bought the stick and rebate with the idea of making a copy to use when I make new window sashes, but that may have to wait for several years. Right now I have a router bit that will do the same job, though with much more noise!

The plane was bought with nostalgia, it is a step up from the folded metal modeler's plane that my brother and used when we were kids in the 1970's.

The drawknife was a steal at a price that was much cheaper than anything new from Lee Valley or other modern day vendor. I will "keen it" one of these days!

I wanted to photograph the slick I bought recently, but it is in the other workshop, I'm too lazy to walk out into the wind and cold. My friend, master chair maker, Terry Kelly is making a handle for the slick. I get a handle he gets a nice wooden coffin smoothing plane, a good trade!

The EverClear is for dissolving shellac flakes and use in French polishing! Honestly!