July 07, 2012
In the comparatively flat forest land of Oregon and California before the days of the trailer, high wheels served to get the short logs off the ground and horses skidded them to landings. They were a phenomena peculiar to the pine of Central and Southern Oregon and Northern California.

Thunder clouds dumped almost 2 inches of rain on our neck of the woods yesterday, it was welcomed, the forest has been so parched here of late that it is down right scary. Since we moved into the house I've been trying to make a defensible zone around the house, we love this place so much we don't want it to burn down in a forest fire. 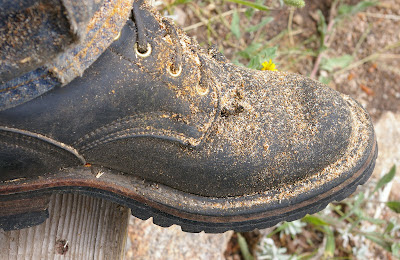 My boots were made by Nick's Boots of Spokane, Washington. I bought them at Dave's Boots in Red Bluff, California, I went in to get a pair of White's, a fine boot also made in Spokane, but came out with a pair of Nick's. A friend of mine went to Dave's to buy a pair of Nick's but came out with a pair of White's. These boots wear like iron and can be rebuilt, so when you work in the woods, you wear Nick's or White's, or buy custom boots from some other high end boot maker. 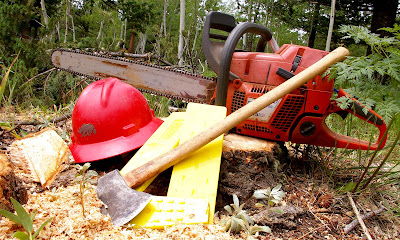 My Husky 385, a hard hat, felling wedges and an axe to drive the wedges into the back cut, all sitting on a stump of a Douglas fir. The tree was too close to the house, other than being a fire hazard the was the chance that the wind (we get 100 mph gusts here in the winter) might have blown it into the house. It was a nice tree, I hated to fall it, but.... A highly prized Plumb "Hudson Bay" cruising axe that I found in a flea market. I use it to carve spoons, limb trees, drive falling wedges and I take it hunting to help with field dressing a deer or elk.