January 11, 2012
In the works of the Cubists the stringed instrument-notably the guitar-quickly became a popular motif. Why? Because it was there.

Snow today, I just heard that the visibility at Denver International Airport is only 1 mile, the snow here is coming down sideways. Today is a good day to work on guitars.

The great guitar maker Jose Ramirez was always searching to make a better guitar. In Things About the Guitar he wrote

An obsession with achieving an enriched sound in the guitar led me to study an old, obsolete instrument: the viola d'amore, which has a very interesting feature. There are as many strings on the inside of this viola as there are on the outside, which are the ones that are played. The inner strings vibrate sympathetically and, together with the outer ones, produce a loud harmonious sound. 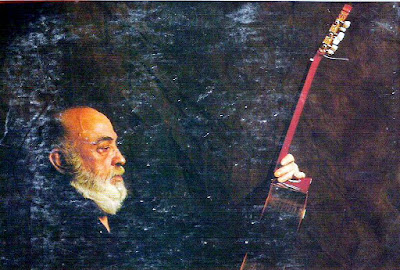 He set to work on this problem and created a guitar with two sets of strings.

The result of this whole contrivance was a powerful, beautiful sound. I immediately presented it to Maestro Segovia who was in Madrid at the time. He was very enthusiastic about the sound but at the same time he pointed out to me the invention's main failing: the inner strings kept on sounding and muddling the continuation of the musical piece being interpreted. It was necessary to cut off the sound of these strings just as in the pedals of a piano. But how? Segovia urged me to find a solution to this drawback, but he never offered opinions or solutions on technical matters that as far as he was concerned belonged to another world. 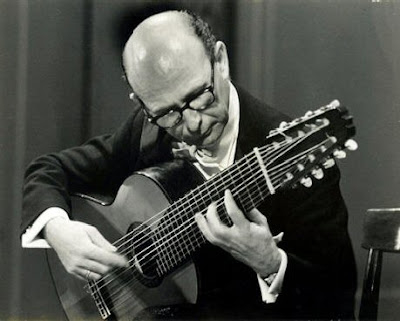 Ramirez continued to work on the guitar's problems.

All the solutions that occurred to me were totally anti-guitar, until I showed the thing to Narcisco Yepes who was also enthusiastic, but as he has a very analytic personality and an untiring investigative spirit, he rose to the challenge to try to help me solve the problem.

...then Yepes telephoned me from somewhere that he had gone to give a concert, and told me: "Forget the inner strings. If you add four strings to the normal six strings all on the outside and these strings are tuned in a certain way for which I have made a study, we will have the same resonant and harmonic supports as with the inner strings, but with the advantage that by using a special technique, they can be easily muffled with the right hand whenever necessary." In fact, this was a ten-string guitar. I easily designed this special guitar and built it with no trouble.

At a private meeting, I turned this guitar over to Yepes, who began to try it out by playing a piece. He resembled a first year student or even worse. After some time, he looked skyward. I feared he was going to release a string of insults, but he didn't. What he said was this: "What a marvelous mess I have gotten myself into."

When I was a young guitar student in the late 1970's, most guitar teachers at the time had a bit of a prejudice against any guitar that had more than six strings, this came from Andres Segovia, to him there was only one plucked string instrument worthy to study and perform on. I never thought much about a ten string guitar, I knew that it could be used to play Renaissance and Baroque lute music on it, I thought that was the only reason for the extra strings.

Then I saw this video and my eyes were opened. As a classic guitar player this guitar makes so much sense, you can hear how the guitar is more resonant, I can only imagine the sound that surrounds a player when they perform on a 10 string. In my web research on this beast of a guitar, I did come across a quote from a well known concert classic guitarist who said that a player would spend more time dampening the resonant strings then actually playing.

Now I get to the reason why I build guitars-I get to make a 10 string guitar so I can play it! Every guitar I have made I made so I could play it. Pretty cool, don't you think!

This morning, instead of doing real work like carving a neck, I asked myself "what if Manuel Hernandez y Victoriano Aguado had made a 10 string guitar?" What would it look like. I pulled out some brown wrapping paper, enlarged the H y A plantilla by 6mm to make its overall length 496mm and with the help of William Cumpiano's book I drew a full size plan. I increased the string length from 650mm to 660mm which is a little closer to the 664mm string length that Ramirez used. My first guitar, which I still play, is a Hernandis which was built in Japan for Sherry-Brener Ltd. in Chicago, it's basically a copy of a Ramirez and it has a string length of 664mm. I played the thing for years and never thought about the string length until I played a guitar the was 650mm, I found that more comfortable. After playing the shorter scale 19th century Romantic guitars, I was surprised to find that it was easier to play the 664mm length. I had to stretch my fingers further and there was more room to hit the strings and the frets, I wish I could explain it better. Long story short, when I make a 10 string guitar it will have the longer scale. 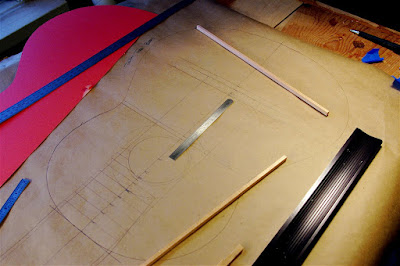 It looks good, though I think that I will buy Roy Courtnall's plans for a 10 string guitar to make sure that I get the peg head dimensions correct, along with Scot Antes plans for a 1966 Ramirez. I'm trying to be a copyist, you learn good skills that way.

All I have to do now is to find an ebony fingerboard that is over four inches wide and some really nice Spanish cedar for a neck. I have a really nice piece of Sitka spruce for a top and my last set of Indian rosewood for back and sides, I could re-saw some bubinga too for this project.

Janet Marlow is a wonderful performer and composer, here she is playing one of her pieces on a 10 string guitar.