November 27, 2018
Among God's creatures two, the dog and the guitar, have taken all the sizes and all the shapes, in order not to be separated from the man.

Early this year, a young composer/guitarist asked me if I would make him an eight string guitar, the so-called "Brahms", or cello, guitar. It has an extra treble string and bass string, this extends the musical range of the classical guitar in a tremendous way. This guitar was developed in 1994 by the luthier David Rubio for the guitarist Paul Galbraith, and if you wish to read more about how this guitar came into existence, please go to Wikipedia or Paul Galbraith's website to learn more.

There are no plans, that I know of, for this guitar, I knew that the first Brahms guitar had a bass string length of 660mm and the treble string length of 630mm, and today most makers use 650/615mm string lengths. I chose a 650/620mm string combination and pulled out a roll of brown paper to start my layout. 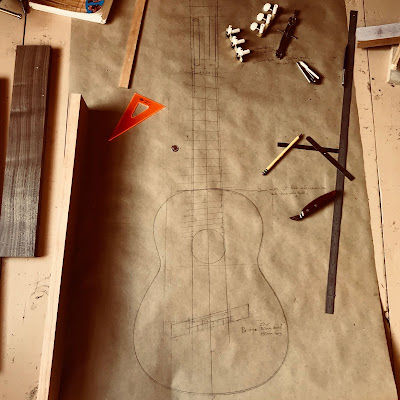 My biggest concern was to place the bridge in the most responsive place of the guitar's lower bout. Historically, a maker usually puts the bridge just ahead, more towards the sound hole, of the center of the guitar's lower bout. I drew plans using outlines guitars made by Jose Ramirez III, Hernandez y Aguado and Antonio de Torres, but it seemed to me that there wasn't enough room in the lower bouts to make a more responsive guitar. An outline used by Santo Hernandez spoke best to my visual senses at the time and I chose to use that one.

(This matter of the guitar's outline is pure speculation, I am sure that any outline would have worked. In retrospect, when I make the next Brahms guitar, I will probably use the Ramirez outline simply because the upper bout is wider than the others and will visually balance better with the wider neck and head stock.)

Layout of the fret placement was made very easy with the help of R.M. Mottola's wonderful website. He has a wonderful multi string fret calculator which was invaluable to me in making this guitar, I need to send him an email thanking him for this wonderful service.

After drawing the plans, the next order of work was to make a mock up of the neck. On a standard classical guitar, you cut the neck blank straight across with a 15 degree bevel, but on the Brahms guitar I discover that along with a 15 degree bevel cut, there is also a 10 degree crosscut! (That is for a 650/620mm string length, the angle would be different for a 650/615mm length!) 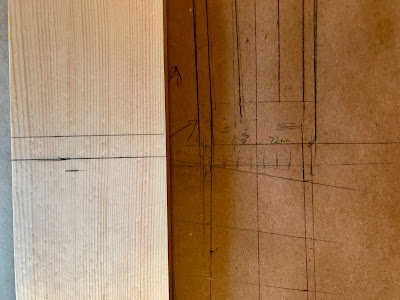 I took a piece of lodgepole pine to make the mock up neck. 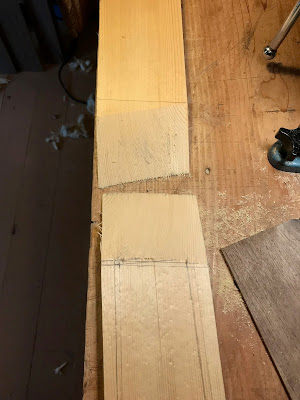 Here is the neck after I have cut a 15 degree bevel on a 10 degree crosscut. At this point on a standard classical neck one can put the two pieces together in a scarf joint and see how good one's saw skill are, but... 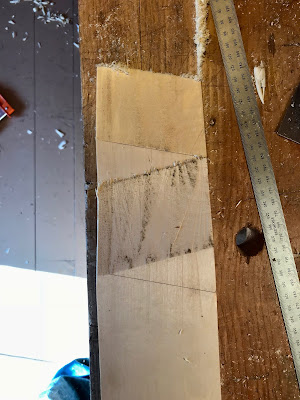 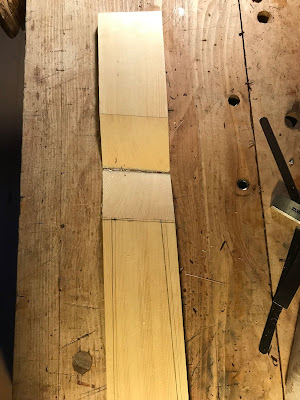 The pieces are planed to make a nice joint... 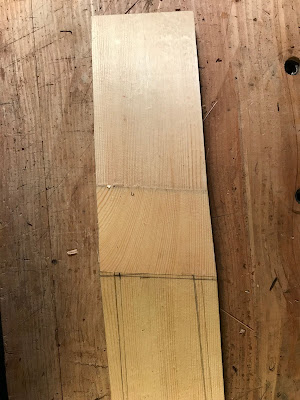 and then the pieces come together well.

The guitar is nearing completion, I am in the middle of shaping the neck, there are three frets that need to be added and then I can start the finishing process.

Stay tuned for more on how I made this guitar!