August 19, 2018
For the convenience of planing, and other operations, a rectangular platform is raised upon four legs, called a bench.

If our shop is where we live, then our workbench is where we think and feel, where we do what is most satisfying to us as craftsman.

The top was made from big incense cedar tree that I felled and then milled with a Granberg Alaskan mill attached to a 1960's era McCulloch chainsaw sporting a twenty eight inch long bar with 3/4" pitch chain. The legs are also incense cedar and the cross pieces were milled from a black (red) oak tree that grew about twenty from the incense cedar.

The idea for the bench came from Roy Underhill's The Woodwright's Apprentice, at the time I needed a workbench that I could transport. 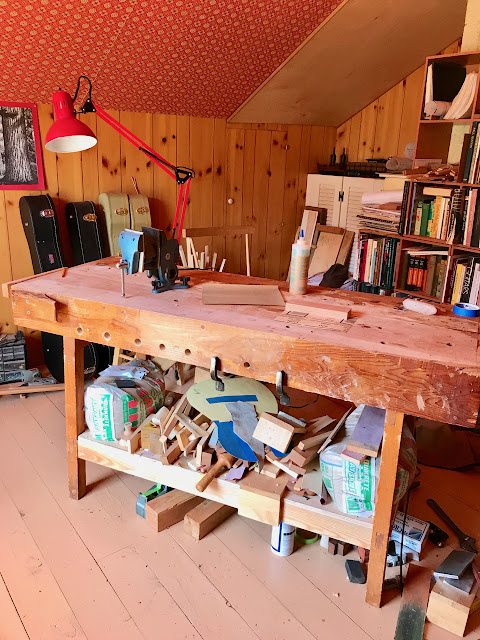 I didn't mill enough wide boards from that cedar tree, in order to make the bench top wide enough for my use, I ended up attaching the apron to the side of the top, it added an additional two inches to the width.

The bench originally had a tool well, which I replaced after a couple of months of use, all the well did was collect wood shavings, with a single one inch thick cedar board. That board worked well enough, however, it wasn't thick enough to keep a hold fast fast in a hole. This past week I decided I needed to upgrade the bench again, last year I added the lower rails and shelf, it was time to replace the one inch thick board with something thicker! 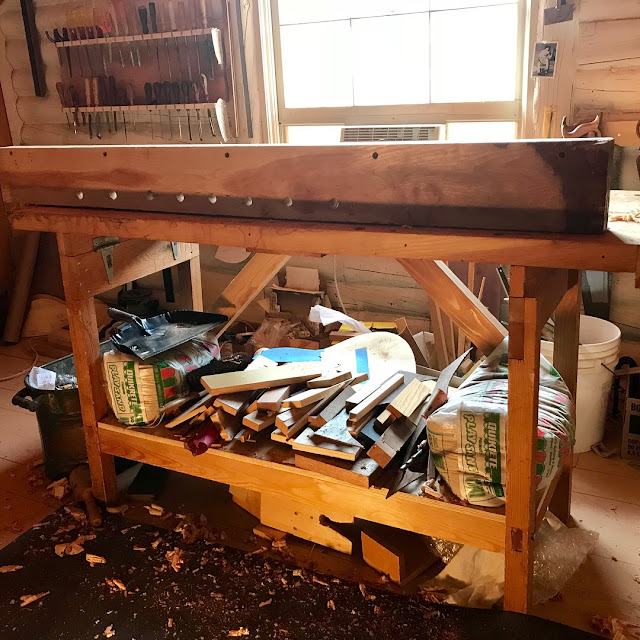 The first thing I did was to remove the original apron, the apron has been attached to the top since 1995! 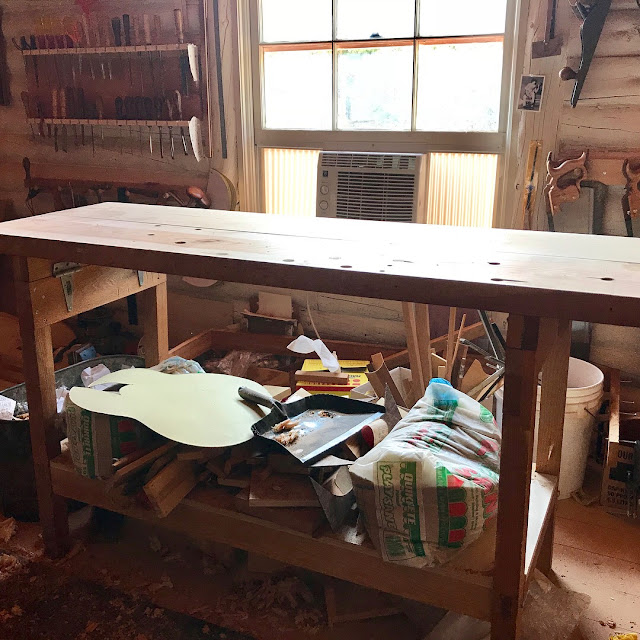 The angled braces were removed... 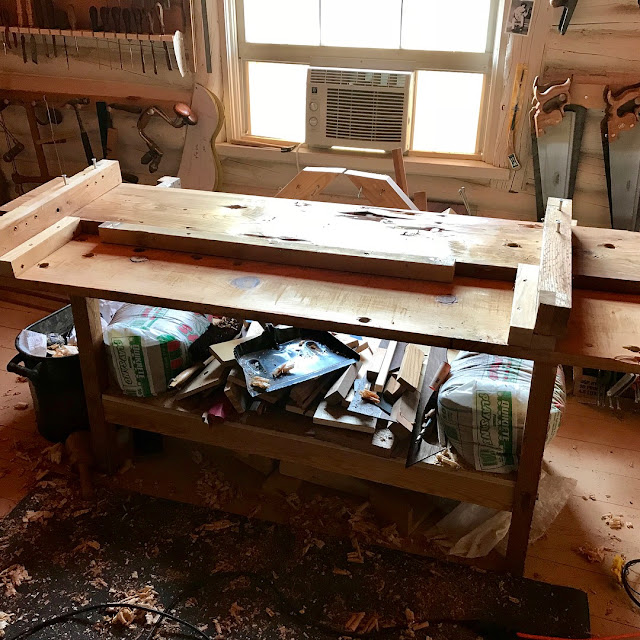 Then I removed the screws from the hinges that were holding the battens that held the top in place... 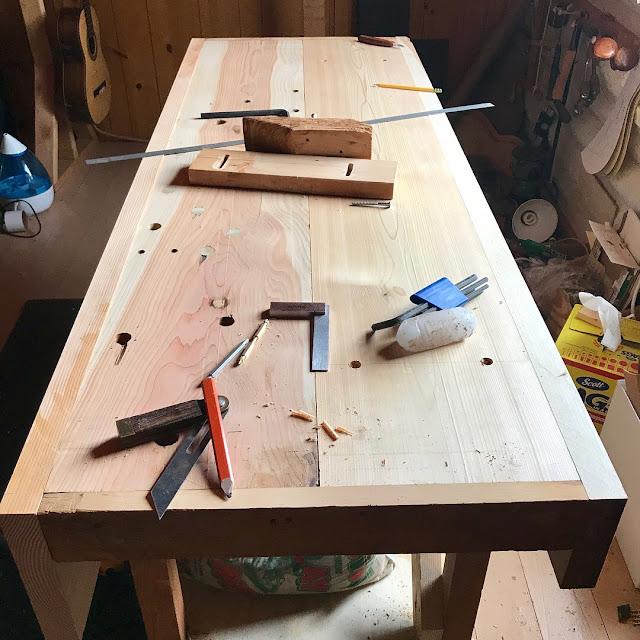 The original top I sent through a thickness planer to clean up twenty four years of patina and glue. It is one and seven-eights of an inch thick, down from two and one-eighth of an inch.  The off side board you see is two planks of western red cedar that I glued together about two years ago just for this purpose, it is the same thickness. "The top board next to the workman should be from one and a half to two inches thick..." Nicholson. 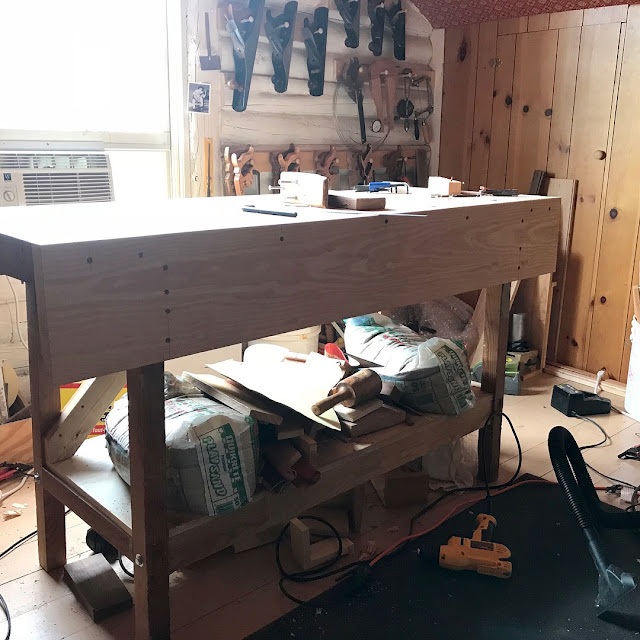 The original apron was evened up on the table saw and run through the thickness planer, however, I took a little too much off the width of the board, the hold fast holes were too close to the top. There was a board of Douglas fir in the little shed that had been air drying for two years, I ran it through the thickness planer and attached it to the top. I also attached the apron to the front legs with some heavy duty construction screws. The original apron is now on the off side of the bench. I also re-attached the cross bracing from leg to back apron to keep the bench from racking, this is opposite from Nicholson's advice, "In order to keep the bench and work from tottering, the legs...should be well braced, particularly the two legs on the working side." 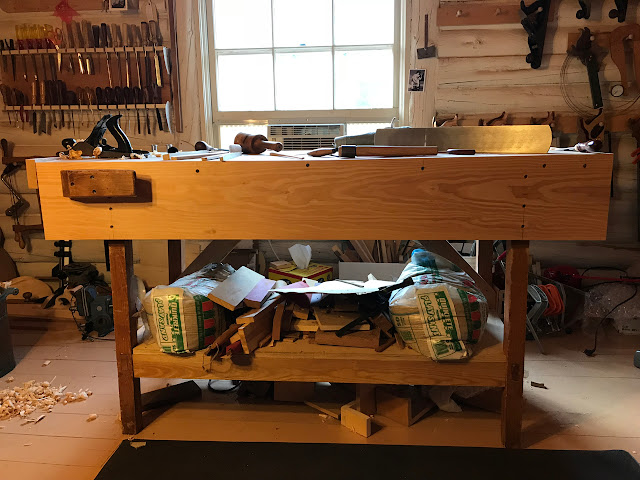 I kept the original hook/frog/crochet, it has worked well for the last twenty four years, I see no need to replace it. "The 'frog' on the front surface of the bench will hold your work for...edge...planing." Underhill.

I will drill new holdfast holes on the apron as I need them, I don't use the apron that much, I don't re-saw tone wood too often these days and I use the planing stop for most of my planing tasks.

So what makes this bench a little unorthodox?

...most of it is made out of cedar, not the usual bench wood.

...the apron is attached to the side of the top plank, not underneath it like a true Nicholson style bench.

...the planing stop is a board attached to the left hand front of the bench, held in place by hanger bolts and wing nuts.

...the under carriage is still the original, the legs are too spindly and there are hinges that are holding the battens that attach the top to the legs!

If I were chopping out dovetails, mortises, etc., on a daily basis, I suppose I would make a very close copy of the original Nicholson bench from maple or some other hardwood.

As it is, I make classical guitars, that means I don't have to pound on the bench too often.

One of these days, I will probably install a new undercarriage, the Douglas fir legs and cross pieces are cut and milled sitting in the new workshop waiting do something other than be shop flotsam.

To read more about this bench before I started tweaking it with "improvements" please click here!