November 17, 2016
The trees of the West are a benign presence, mighty and healing...

The postage stamp that I live on has only seven species of conifer trees and one species barely grows big enough to be called a tree. The Continental Divide is about seven miles as the crow flies from our meadow, we don't get the howling winds that you find when you live closer to the Divide, but the winds do limit the height of trees and since this is the east side of the Rocky Mountains we live in a rain shadow. Not much moisture makes it to the ground. 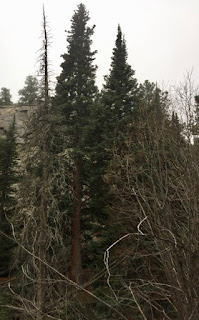 Twice a day, I walk our dogs across our neighbor's property to Forest Service land and we squeeze through a narrow gulch to reach the upper slopes. In this gulch there is enough moisture to allow white fir and Engelmann spruce to grow. The tall tree in this photo is an Engelmann spruce, one of five that live in this gulch. 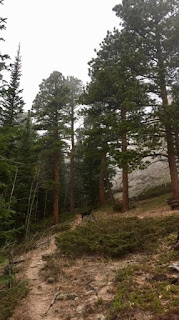 Ponderosa pine live on the very fringes of the gulch, the scientific name for the variety that inhabit this part of the Rockies is pinus ponderosa, scopulorum, which means "among the rocks". I understand that some of the old timers in this region called these pines "rock pines". 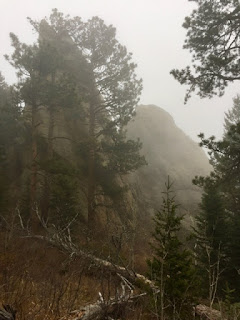 Ravens have a nest on this rock and magpies, too, usually raise their young in this part of the gulch. 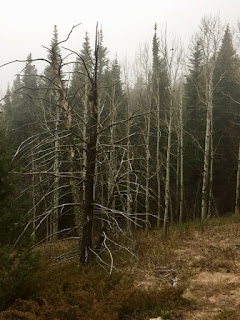 The snag in this photo is a dead Douglas fir, an older gent said to me "35 years ago the spruce bud worm came in and killed most of the Douglas fir around here. That was after the pine beetle came through." 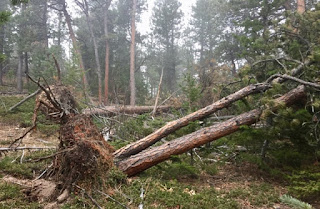 Big winds, with gusts up to 120mph, often visit us in December and January and these pines are victims from such a storm last January. We often get big wind storms in November, but so far this month it's just been "breezy"!

What are the conifer species in my backyard?