I "Upgraded" My Folding Workbench

March 07, 2016
Remember that a good workbench won't make you a better woodworker, but it sure helps.


My workbench has a vast amount of sentimental value to me. I built it in 1994 from incense cedar (pencil wood) and black (red) oak trees that were on my property, I felled the trees and milled boards from them with an old, old McCulloch chainsaw attached to a Granberg Alaskan mill. I wasn't much of a hand at chopping out mortises or dovetails back then, but I continue to use the bench on a daily basis. The best part about the bench is the incense cedar top, whenever I flatten it the spicy aroma that comes from the wood immediately takes me home to a patch of land in the Sierra Nevada of California. 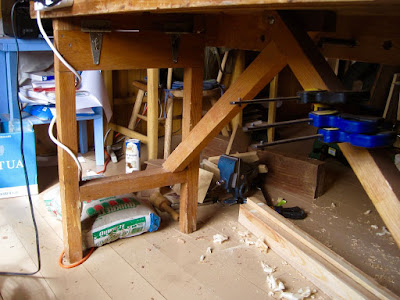 For those of you who are fans of Roy Underhill, you will recognize this bench from his book, The Woodwright's Apprentice, a book every woodworker should own. I made this bench because I was a seasonal park ranger with the National Park Service at the time, this bench was easy enough to throw into the back of my pickup truck.

It's a great design, but, it is very light, I have to use two fifty pound bags of sand to weigh it down and now after twenty years of use it racks so much that it is almost unusable. 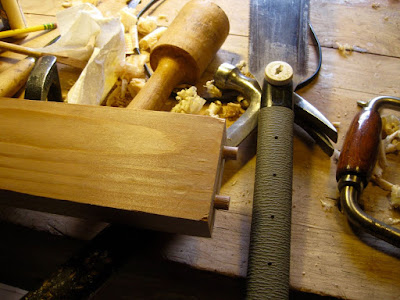 Yesterday, I spent a couple of hours "upgrading" the bench with a little help from the late Carlyle Lynch. Carlyle Lynch drew up plans for a "Woodcarver's Bench", which can be purchased from Tools For Woodworking, and one of the fasteners that he recommended for attaching the stretchers were lag bolts. I have made several benches using lag bolts and they turned out great!

I made two new stretchers from Douglas fir, added two alignment dowels at the ends of the stretchers, drilled corresponding holes in the legs... 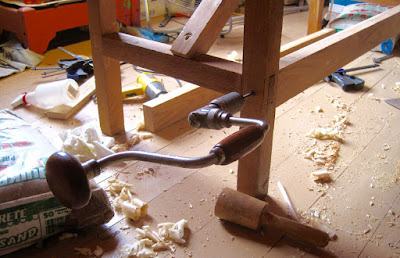 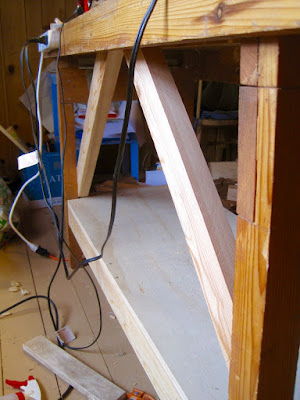 After tightening the bolts, the bench racked more that I wanted, so I added two pieces of Douglas fir and screwed down a shelf of 3/4" thick pine plywood. 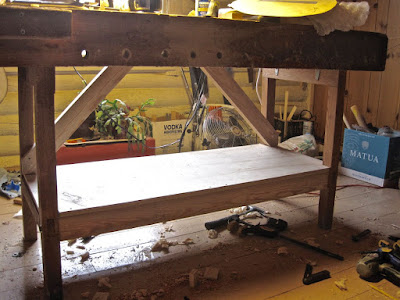 The bench looks more like a "conventional" bench, I miss the spindly look it had, but it is more solid that it ever was before I did this upgrade. I put both bags of sand back on the shelf and eventually I will build an under cabinet in the hopes that a cabinet full of tools, etc., will add enough weight to the build to dispense with the sand bags.

Though I can't fold up the legs in just two minutes by removing just two carriage bolts, when it comes time to move it will take longer to carry it down the stairs then to remove the few screws and lag bolts.

This was two hours of time well spent. Good thing I did this work, I will be planing an ebony fretboard today!