November 16, 2015
You have heard people say, "He cannot see the woods for the trees." Meaning, that he cannot grasp the meaning of the big thing because a part of the thing holds all of his attention. This could apply to the average man's understanding of the importance of forests. The average man does not see the forests except as so many trees.

I enjoy collecting photos of a photographer who worked out of Susanville, California in the early decades of the last century. I am always looking for postcards of the logging scenes that he captured with his camera, especially those that he took near where I was born and raised in Northern California. 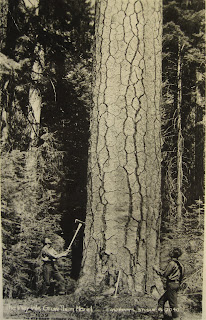 I recently acquired this postcard, it's a great shot of two loggers preparing to fall a huge ponderosa pine.

The logger on the left has a Puget Sound style double bit axe, the logger on the right has a "misery whip", a two man crosscut saw over his shoulder and is holding an axe in his right hand.

If you look at the base of the tree you can see a sledge hammer with wooden falling wedges. The one thing I don't see is a bottle of "coal oil", kerosene, a lubricant for the saw.

The photo was copyrighted by the Red River Lumber Company, which owned a huge sawmill and plywood plant in Westwood, California. Click here to see more photos of the Westwood mill. 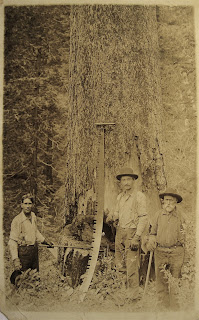 This is a photo from my family's collection, it was probably taken by Bob Stinson, a photographer from Red Bluff, California, who traveled to the local logging camps and took photos of the loggers and logging operations just after the turn of the last century.

These three gents are making a face cut on what appears to be a sugar pine that has a rotted out heart, if you look real hard you can see a void in the tree just behind the crosscut saw.

The man on the far right is in a photo that Stinson took of the logging crew at Ed Byrant's camp, which was near Lyonsville, California, I assume this tree isn't too far from where that camp was.

This sugar pine wouldn't have been considered a big tree in that area... 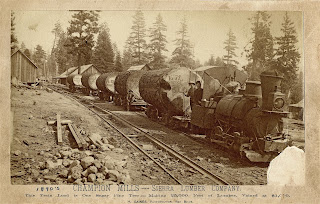 ...since loggers were bringing out monsters such as the sugar pine in 1890... 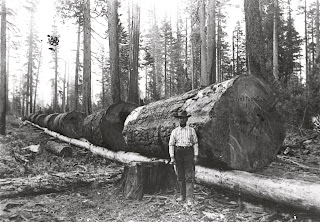 Why do I bring up these big trees?

There aren't many left. 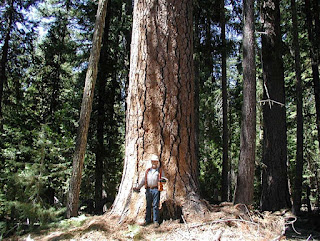 This tree was "discovered" near Hayfork, California in 2008, it is 240 feet tall with a diameter of 8 feet! Click here to read the article about how this tree was found. 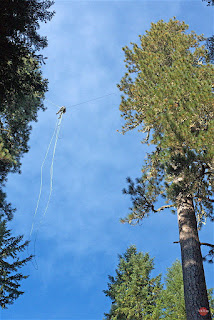 The world's tallest ponderosa pine, not the tree on the right of the photo, but the one to the left that the rope is attached to, at 268 feet tall, was located in 2011. Click here to read that article.

Thank goodness there are national and state parks that have preserved other large conifers!

I did some more research online and found several on-going studies that identify and age old trees.

It makes me think more about this thing called sustainability.

I wonder how many other woodworkers are concerned about having great lumber to work with in the future.

I know I will be looking for wood from sustainable sources to build my guitars, I need to practice what I preach.