Miguel Rodriguez Style Guitar - The Last Guitar of the Season

April 22, 2015
It is easy to create a mystique about guitar making. There must be something magical about a process that constructs a wooden box, stretches some strings across it, and persuades delectable sounds to come from it.


Back in January or February, I made the neck for this guitar. I jointed and glued the western red cedar top about the same time and installed the rosette.

Some where in this blog are postings of when I made the three piece back and when I split out the braces for the top.

I bent the sides last week.

All this was done so I can assemble this guitar by Saturday, the last guitar of the season. I go back to my day job as a historic preservation carpenter on April 28th, after that I will continue to work on this guitar and three other guitars as I can make time. 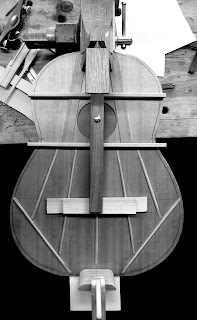 This guitar is braced in the manner that was used by Miguel Rodriguez,Sr. and his sons, Rafael and Miguel. Those of you familiar with Rodriguez guitars will notice that I did not include the diagonal brace that was on many of the Rodriguez guitars after, say, about 1963.

Click here to see plans of a 1977 Rodriguez to see the diagonal brace I am talking about and click here to read an article by Ron Fernandez on Rodriguez flamenco guitars.

In that article, Mr. Fernandez mentions that when he was in the Rodriguez workshop in the early 1960's he noticed that none of the classical guitars had the Jose Ramirez III inspired diagonal brace.

The point I am trying to get at is I want to make guitar that will be close to that earthy Spanish sound from the 1960's, a sound I remember hearing on the recordings of Andres Segovia and Narciso Yepes when they both played Ramirez guitars, not to mention the sound of the Rodriguez guitar that Pepe Romero used on his recordings in the early 1970's. 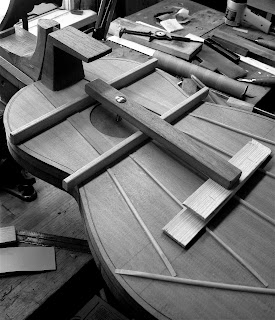 I graduated the cedar top as close as I could to the specifications that are on the plans of the 1977 Rodriguez guitar drawn by Tom Blackshear - 2.6mm in the center of the top, then falling off to 2.5mm, 2.4mm and finally 2.3mm along the outside edge of the top.

The "fan" braces are close to the dimensions in the plan, however, I am leaving the transverse braces (the braces top and bottom of the sound hole) rather tall in the manner of Santos Hernandez. I am looking for a big bold sound from this guitar, a sound that will bounce off back wall of an auditorium and I want it to sing like the best coloratura mezzo soprano so your heart melt.

Right now I am waiting for the glue to harden on the end block, sometime after lunch I should be able to start fitting on of the sides. Once the sides are on then I can install the back, after that I will work on it as I can. If I don't get to it this summer or fall it will part of my winter's work.

Winter work that I am looking forward to doing.