March 24, 2015
It seems but natural and reasonable that the woodworker should have at least an elementary knowledge and understanding of "wood", the principal material with which he works.

I purchased several sticks of Sitka spruce bracing material six months ago from a well known lutherie supply (which will remain nameless, I still need to buy tonewood from them), I used one blank to make braces for one guitar and I had no problems working it. 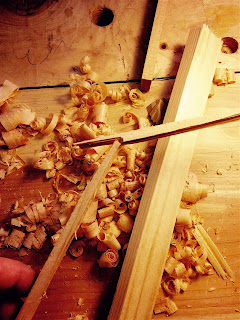 Prep work started on the "conservatory model" - a high quality, lower cost guitar aimed at students who can't afford a $3,500 guitar - with jointing, assembling the cedar top and installing a rosette, making the neck, etc., and splitting out the Sitka spruce braces.

In the above photo you can see what happened to a brace when I gently (yes, I said gently) flexed it, it broke!

The reason it broke under light pressure is because the early growth rings are much wider than the late growth rings. I noticed this when I received the wood, but figured, hey, it's Sitka spruce it should be tough. 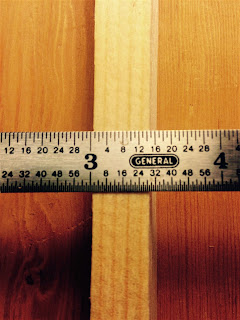 I was wrong. Here you can see how wide the growth rings are, this wood isn't even suitable for the beefier transverse braces that go above and below the sound hole, it flexes too much. Here is a piece of old growth Douglas fir that I've been hoarding for fifteen years, you can see how tight the growth rings are.

The piece split well and is very light. I used Douglas fir for guitar bracing when I first started on this adventure that is lutherie, it's terribly strong, though can be a little heavy. Several guitar makers told me I was crazy to use it because it is too heavy.

Not all Douglass fir is "too heavy", the braces that I split out were as light as the Sitka spruce. Yes, I weighed them! 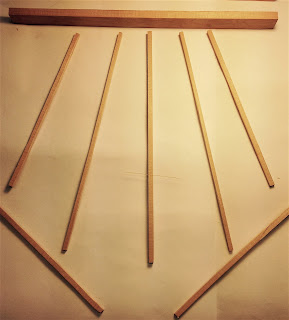 So once again I am back using Douglas fir, this time for braces on a Miguel Rodriguez style guitar.

I grew up with Douglas fir because it was a tree that lived in my backyard which was the million acre wood known as Lassen National Forest. I know how Douglas fir responds to an axe, a plane and a nail. Sitka spruce doesn't grow where the Cascade Mountains buried the Sierra Nevada, I didn't get a chance to work with until I was an adult.

Sometimes it isn't a bad thing to stick with something familiar.