Antonio Marin: Yes, but only two or three per year. This is a spruce town.

From an interview with the great Granada guitar maker, Antonio Marin, American Lutherie #117

A young man visited my studio the other day to chose a guitar from my inventory, he was looking to replace the Asturias brand guitar that he is currently playing. His two complaints about the Asturias were the string length (656mm) and the neck is too thick and rounded. 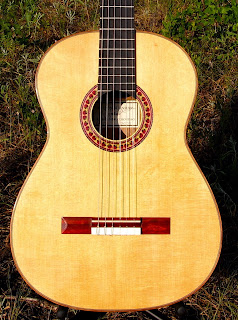 
I handed him a spruce/walnut guitar (photo above) with a scale length of 650mm. He loved the neck and the string length, but I noticed right away that he was struggling to get a good sound out of it.

So, I pulled out one of my latest guitars, the one based upon Antonio Torres's guitar FE 19, which is loud, has an amazing voice and capable of many nuances and again, as he played this guitar I noticed that he didn't get along with it.

"Wilson," he said, "I really want to play that Douglas fir/mahogany guitar that you brought to the Guitar Celebration at Metro State."

I got that guitar out of its case and handed it to him.

It was startling to hear him play that guitar, it was clear that a spruce topped guitar was not for him. The piece of music that he played was immediately clearer in sound and quality, no flubs with the left or right hand.

This guitar has a 640mm string length, one-half inch shorter then his Asturias, which he noticed right away and mentioned that the neck on my guitar made it easier from him to play.

For a little experiment, I let him play my old battle axe, a cedar top Hernandis guitar with a 665mm string length that was made in Japan in 1973 and imported by Sherry-Brener, the one that I played at the Christopher Parkening master class (click here for my posting on that) all those years ago. Yep, he could play that guitar well and it turned out that his Asturias guitar has a cedar top.

I told him that at this point in his studies he is a Douglas fir and cedar man.

I never would have thought that wood could influence a classical guitar player that much. 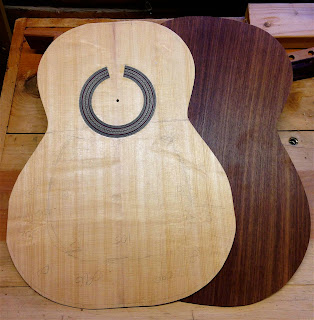 A true Spanish guitar is made of spruce and rosewood, like the woods in the photo above. I strive to make as Spanish of a guitar that I can, even though I am not Spanish, I want to capture that sound I heard in Segovia's and Sabicas' recording when I was studying the classical guitar.

Working with these young musicians is showing me that I need to make instruments that fit them, that fit them physically, sonically and dare I say it, emotionally. The guitar they play should blow their minds so much that they can't stop playing it and through that constant playing they become better musicians. That is a goal worth working for.

The young man will come back next weekend to pay for and take delivery on the Douglas fir/mahogany guitar. He mentioned to me that he wants me to make him a guitar for his senior recital, which will be in one year.

I all ready know what woods I will use for that guitar: a Douglas fir top; black walnut back and sides; walnut for the neck; black locust for the fret board and bridge; and braced with Engelmann spruce.

All woods that grow in Colorado. 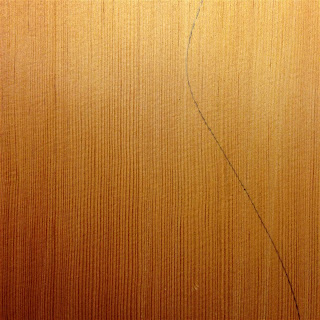 Douglas fir that was salvaged from an old bleacher seat. I've had this piece for 15 years

Time for me to go have lunch and get into the workshop and do some work!