Make a Mountain Man Green River Knife in an Afternoon...Well, Sort Of: Part 1


from the website, Mountain Men and Life in the Rocky Mountain West Malachite’s Big Hole


This winter I want to build a Lyman Great Plains Rifle, a muzzleloading rifle that is based upon the famous Hawken rifle. Building this rifle will be a great diversion for me, I will have quite a few guitars to make this winter.

So looking ahead to when the rifle is completed and the next muzzleloading rifle deer season, I thought it might be nice to make a Russell Green River knife to add to my "muzzleloading kit".

The piece of steel in the upper part of the photo was in a drawer of my grand father's work bench. I was always told that it was from an old crosscut saw, one that was used for felling large conifers, and that some of my older cousins had tried to make a knife out of it and never completed it.

I remember handling this piece of saw blade when I was eight years old, I will be fifty-two years old in a couple of weeks, I am pretty sure that this blank was roughed out before I was born! For the last twenty years I have wanted to finish the knife.

With an image of a Green River knife in my head I sketched out drawing and traced it onto the blank. 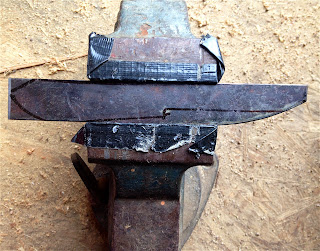 First thing I did was to grind off the old point so I wouldn't stick myself while I worked on the blank. 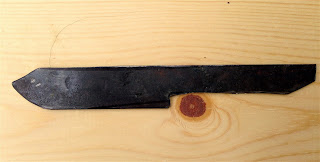 Then I took my side angle grinder which has a metal cutting blade on it and proceeded to grind away what didn't look like the knife I want.

The knife after the majority of the grinding was done with a side angle and a bench grinder.

I established the edge by draw filing. Draw filing the knife while it is attached to a make shift knife board.

I spent about an hour this afternoon sharpening the edge on an old water stone, sharpening and sharpening and then I realized that the metal is too soft to hold an edge for long. I was afraid of that.

This weekend I will work on making a forge from a fire brick so I can heat treat the blade.

First I will have to anneal it, then harden it and then temper it.

I really didn't want to have to go to all this work.

Stay tuned, I will post more photos of this as I can. I hope I can get the brick forge to work!
at September 02, 2014