August 24, 2014
The Greek Revival style is an adaptation of the classic Greek temple front employing details of either the Doric, Ionic, or Corinthian order. 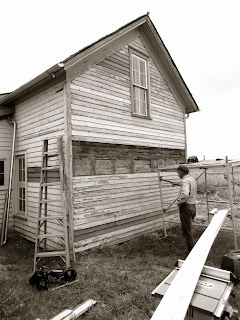 West elevation. The plaster was used as insulation, this was put in place when the building was first sided.

This side of the house that I am looking at may be the original 14x16 log structure that was built on this site in 1862. I haven't pulled off anymore siding and corner boards to see how these logs were notched, I need to keep as much original material as possible to maintain the historic integrity of the house. So far, the house isn't giving up much information as to what year it was built.

This past Friday I pulled off siding on the south elevation that was covering the lowest logs between the two doors (and underneath the window) that you see in the above photo... 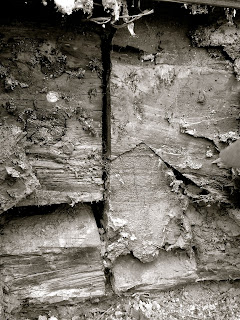 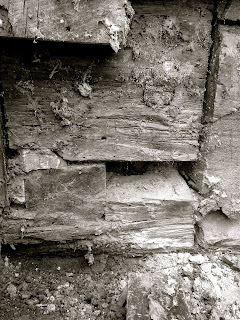 In the lower left of the above photo you can see the square end of a floor joist of the original building. All the joists in that part of the building fall on 16 inch centers. When I measured to the left of the center this joist another 16 inches the tape measure fell on what would have been the 16 foot mark of the building. Hmm.

Tree ring dating of the logs would tell us what year the trees were cut down, not when the house was built. The men who built this house may have left the trees "mellow" for a year before they used them or used them as soon as they were cut.

Speculation about this house's construction is running rampant, and in a way, I hope we don't learn every thing about it...