July 19, 2014
The [Greek Revival] style disappeared in the East before the earliest attempts at mining in Colorado, but its influence was felt nevertheless as miners came west from other areas. 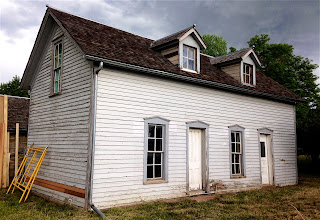 Those of you who follow my blog know that I work 7 months out of the year as a historic preservation carpenter for a government agency.

My latest project is working on a house that was built in the 1860's and it is need of some maintenance. I am replacing the worst pieces of siding, I've removed most of the sashes so that cracked lights can be replaced and re-glazed, and then I and another worker will scrape paint and prep the building so several volunteer groups can doing most of the painting.

This house is not stick built, it is really a log house! The timbers are hewed on 2 sides and joined at the corners with true dovetailed notches. The roof and attic are framed with full dimensioned lumber, the furring strips that hold the siding are also milled lumber. Whoever built this house was a highly skilled carpenter who knew how to use an axe. I haven't found out what the exact date of construction was, I was told 1860, I think it was a little later, because I don't think that there was a sawmill working in the vicinity that early. I'm guessing the construction date is closer to 1863-64.

To continue Mr. Stoehr's quote on the Greek Revival style:

Although no pure examples of the Greek Revival appear in these towns, a frontier adaptation of Greek detailing was present. The pedimental lintel used over the doorways and windows was a simple detail that could be added to the otherwise plain log and vernacular structures.

That statement fits this house to a "T"!

Just a little over a mile to the east of this house, there is a fancier Greek Revival house that has seven gables, it's a show piece of architecture for the little community it is part of.

I am grateful to be the lead carpenter on this sweet little house that others think is ugly, it is a wonderful part of our nation's heritage.