Making a Copy of a Hernandez y Aguado Guitar: Laminating the Sides

January 29, 2014
I will now rest a while to write about the Dalbergia Latifolia (Indian Rosewood), whose unquestionable beauty, like the rest of the Dalbergias, is more serene and demur than her explosive Brazilian sister, and offers much greater reliability.

Last year I took the plunge and made several outsides molds to laminate guitar sides, one was for a smaller bodied Hernandez y Aguado guitar and the other for the famous FE 19 of Antonio Torres.

I bought Alaska yellow cedar veneer and thin strips of hard board from JS Bogdanovich Guitars, the cedar is to be laminated to the side and the hard board is for the glueing cauls. (You can read about laminating guitar sides in Mr. Bogdanovich's book, Classical Guitar Making).

The real world and a seasonal job called me away from the work shop last April so the cedar, molds and hard board sat quietly in a corner of the studio until just a few weeks ago. 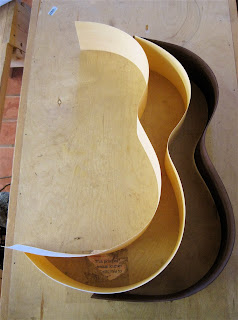 I've been wanting to make another guitar based upon a Hernandez y Aguado guitar, one that will have a redwood top and Indian rosewood back and sides. Last year I posted about inlaying a rosette into the top and carving and stippling the head stock of the neck.

Last week I thinned the sides down to a 1/16th of an inch thick (that will be another posting!) and yesterday I bent the sides and the veneer. 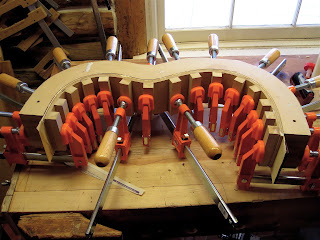 Then I applied yellow glue to the different layers and put all of it in the mold and started clamping. I never thought that I would own 15 clamps that were exactly the same! As George Ellis says in his book, Modern Practical Joinery, I made haste slowly while doing this glue up. In this photo I've turned the mold over to clean up the squeeze out on the "bottom" of the mold. 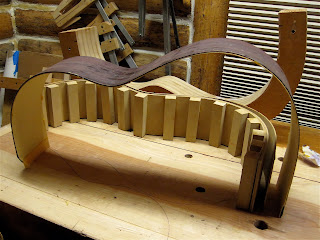 This morning I took the side out of the mold. There is some spring back in the lower bout of this side, it's not too bad and I can deal with it when I assemble the guitar.

All and all, the process went well, though I plan on buying some hard board to make my own slats. The ones that you purchase from Bogdanovich are a little narrow for the depth of the sides that are used on a Hernandez y Aguado guitar.

My biggest criticism of "Bog's" book, and purchasing materials from his store, is that you can make only the guitar that he makes in the book and DVDs. You can't make a copy of a Torres, Bouchet, Ramirez, etc., by using his book.

If you want to make a guitar, I recommend that you use either the Cumpiano/Natelson book, or the Courtnall book. Or buy the Bogdanovich book and make his guitar. I've posted about these and other books elsewhere in this blog.

I will laminate the other side today.


Why laminate the sides?

I'm good at bending the sides on a bending iron, but I only get the chance to do it two or three times a year, I wish I could do it more often. I figure by laminating the sides the shapes of my guitars will be more consistent, which I worry about though I shouldn't.

Lamination makes the sides stiffer which will help the sound of the guitar, because really all I am doing is making a drum with strings. The stiffer the drum rim the louder the drum.

I know that Jose Ramirez III laminated the sides of his famous 1A guitars in the 1960' and 1970's and many of those guitars had an incredible sound. Michael Thames, a luthier in Santa Fe, New Mexico laminates the sides of his guitars and so do several other makers.

I also want to make the best guitar that I possible can, I need to step up to the plate and play hard ball.


Here is a video of Andrew York playing an Antonio Torres guitar made in 1888!