December 28, 2013
In North America, the pine family is represented by 64 species of pines, spruces, firs, hemlocks, larches and Douglas-firs. Thirty-two of those species are found growing wild somewhere in California...

I regard both the Picea Abies and the Thuja Plicata as two beautiful sisters - one blonde and the other brunette; one European and the other American, although I confess that I have a soft spot for the brunette...


I lost a potential client because I make guitars with black walnut backs and sides.

This person thought that walnut is good only for "student guitars".

Once again, this shows you how effect marketing done by the big name luthiers and guitar manufacturers has succeeded in making players believe that only the most expensive exotic woods make the best guitars.

I can buy a curly walnut back/side set from Allied Lutherie from $220 to $300, and that is paying for one board foot of walnut. Since it is "just walnut", that wood should be used only to make a student guitar, right?

Is the most expensive wood the "best" wood to use?

Is there a "best" wood or woods to use in guitar making? 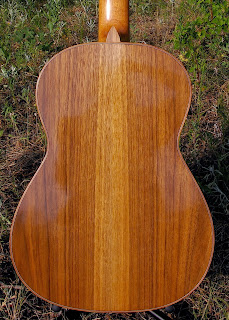 The great Antonio de Torres set the standard for the classical guitar in the mid to late 1850's by using European spruce and rosewood for his finest guitars.

Spruce and rosewood still make some of the greatest guitars, but there are other woods that can be used.

Jose Ramirez III popularized the use of Western red cedar for guitar tops, I have met players who think that cedar makes the best top.

I think spruce makes the best top, a well made guitar with a spruce top is capable of producing far more tonal nuances than cedar. I know several professional classic guitarists who agree with me.

Redwood is a great choice also, it has the clarity and depth of spruce with the warmth of cedar. 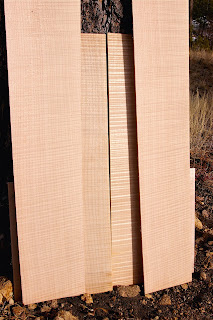 The top of a guitar is the most important part of the guitar, the energy of the strings radiates from the top as it is transferred through the saddle and bridge. The back and sides make a resonance chamber and vibrate some, but do not add as much to a guitar's sound as some makers/players claim.

Click here to see/hear David LaPlante's copy of the famous cardboard guitar originally made by Antonio de Torres. Torres used a spruce top, Spanish cedar neck and back and side made from papier mache to make his guitar. From accounts of those who heard it, it was a great sounding guitar. Click here for John Ray's photos of the original guitar.

Maple, walnut, pear, apple, cypress, locust were some of the woods used by European luthiers before the rosewoods became more available.

It is possible to make a truly magnificent guitar by using woods that are native here in the lower 48 United States: a myriad of spruce and cedar for top woods; back and sides from Claro walnut, black locust, American cherry, mesquite, the different maples; neck woods can be American cherry, Port Orford cedar, Douglas fir, red alder, California laurel and others; and black locust, which is for practical purposes as hard as Brazilian rosewood, can be used for fret boards! 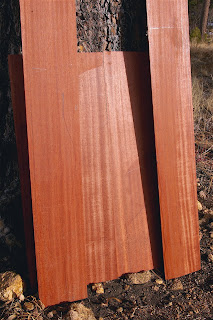 Bubinga back and sides, sawn from a board purchased from Auburn Hardwoods, Redding, California

I have read that Hermann Hauser II and III thought that bubinga was better tone wood than Indian or Brazilian rosewood. Click here to read David Schramm's article on the Hausers.

Potentially, any of the woods that I have mentioned could be "the best". Each client wants a specific sound and playability, secondly they want something that is pretty. 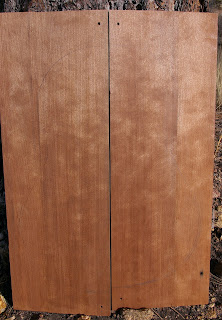 Pillowed redwood that I reclaimed from an old water tank.

Is there a best wood for guitars or for wood working in general? 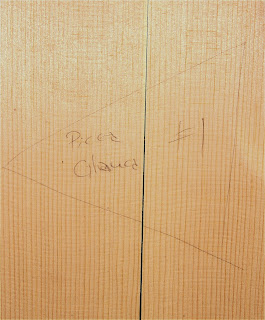 I was born and raised in northeastern California in one of the greatest forests in the world. I had access to marvelous woods: redwood, ponderosa pine, incense cedar, sugar pine, California black walnut, madrone, the list is too long to repeat here.

I was taught that if you couldn't make what ever it was you wanted out of one or more of those local woods, there was no point in making it.