November 12, 2013
Up to the middle of the seventeenth century at least, most joiner's planes were made by the craftsman himself. As they were largely confined to the ordinary bench planes and only one of each type would be required, this was a fairly simple matter. 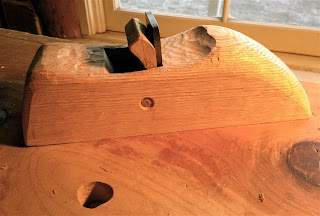 I made the wedge last night and then went at the plane body with a horseshoeing rasp (a leftover from a previous occupation) and a series of spokeshaves. The plane works on soft wood, but I need to round the corners of the blade and then turn a hook on the edge. The real test will be on Indian rosewood that I am using for one of my guitars.

The only power tools that I used to make this plane were a table saw, used to rip the sides off the main body, and a sliding compound miter saw to cut the bed angles. I did use a drill press to drill the hole for the cross pin. I could have done that by hand with a brace and bit, which you can do if you do your layout properly. The other tools used were a No.7 Stanley jointer plane, a No.4 Stanley smoothing plane, a sloyd knife by Frost, a compass and a ruler. A back saw and gouge were used to shape the wedge and I used a horseshoeing (farrier) rasp, several spokeshaves and a No.7 sweep gouge for the final shaping of the body.

Yes, you can make a Krenov style hand plane with just hand tools, all you have to do is take your time.