Re-Toothing a Disston Handsaw, or A Fool's Errand That Ended Well

October 13, 2013
The most difficult part in sawing is starting the saw.

I'm starting to prepare for winter work, that means building a few guitars, by finishing up some projects I started a while back. One of those projects was to re-tooth one of two panel saws I own: an early 1900's 18 inch long Disston crosscut or 1920's-ish Warranted Superior saw that is 20 inches long. The Warranted Superior saw needs some time at the anvil for straightening, so I opted for the Disston.

One reason for the conversion is that at the moment, I am not willing to shell out $250 for a Lie Nielsen rip tooth panel saw. I know such a saw is a bargain at that price, but I need a few more orders to justify the expense.

The main reason for doing this work is the 26-28 inch Disston rip saws hanging by the window behind the work bench can be a little big for ripping smallish pieces of wood. 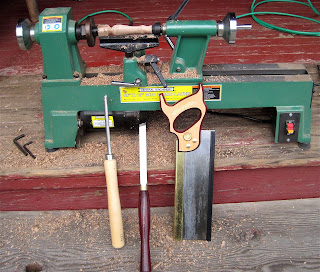 First thing I needed to do was to turn a new handle for the four inch extra slim saw file I used for re-toothing. A piece of walnut on the mini lathe was just the thing and in a couple of minutes I was off to the saw vise. 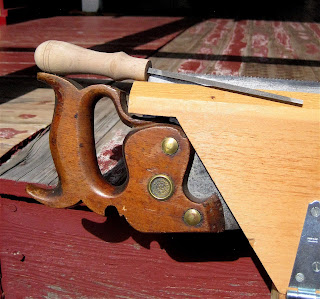 I bought this saw about five, six years ago from Sandy Moss of Sydnas Sloot, just because it was a panel saw. The etching is pretty much gone, I can't make out the model number, the saw is wonderfully straight but had never been jointed properly. By the time the jointing file touched the teeth in the middle of the saw I needed to re-shape the teeth on the heel and tool before I jointed any more, otherwise there would have been no teeth in those locations. 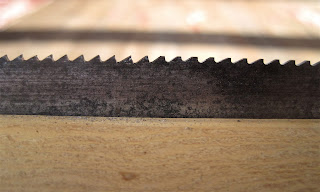 Success! I didn't set the teeth and the saw cuts straight! The kerf is nice and narrow, though at the next sharpening session I might have to pull out the saw set, I don't want the saw to bind in the cut.

I didn't measure how points per inch, I assume it is still around 10 points, which the saw was originally.

Now, I have the rip panel saw that I always wanted, all I needed to obtain it was to use a little elbow grease!