My latest project is to preserve and restore the cabin on the Rocky Mountain Mammoth mine. 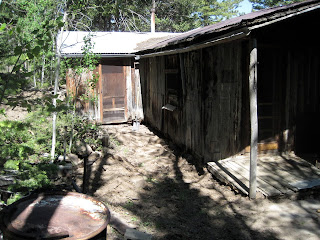 The original cabin, built in 1898 is to the right of the photo, the porch is attached to it. The "L" in the background was added on in the early 1930's.

The Rocky Mountain Mammoth Mine was worked in the late 1890's during a mining boom in Colorado, it was never a large producer and the ore that came out was of a low grade. Around 1905 the mining boom petered out and the mine was silent until the 1930's when gold prices were standardized in the Great Depression. The mine was worked for a couple of years during the Depression and then no more work was done. The cabin became a summer residence for the owners of the mine. The shaft house is still standing, it will get some preservation work done on it next year. 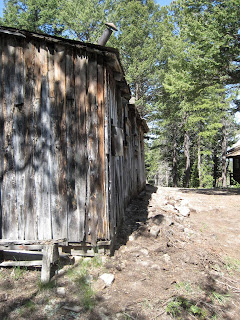 The building is very simply constructed: sill plate was placed on dry laid stone foundation. 2x4's were used as floor joists and plank floor was put over that. The walls are simply a board on board construction, there are only eight studs in the entire building. The rafters are mostly 2x6's covered with skip sheathing and tin roofing. At some later point in it's life, the owners decided to put concrete skirting around the base of the base with the idea that the building needed a real fake foundation. While this was well intentioned, the keep moisture against the bottom of the exterior boards and sill plates, on one corner of the building all of the sill plate has rotted away. 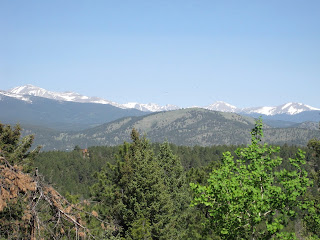 The view from the job site. 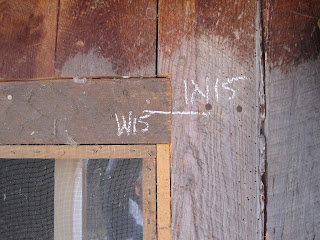 In order to assess the damage, I had to pull off the first layer of boards, this photo shows one way to mark boards so you know how to put them back in the proper place! 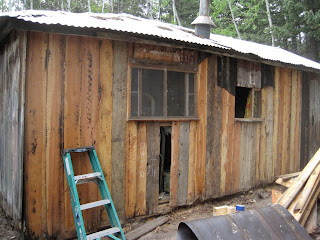 I and my colleague are going to have to lift the wall of the building with screw jacks and then dug out the original foundation so we can drop and remove the original sill plates and install new ones. This is going to be a fun job.