Yesterday, I joined Rocky Mountain Tool Collectors during their bi-monthly meeting which was held at the Carolyn Holmberg Preserve at Rock Creek Farm near Louisville, Colorado. It just so happens that my supervisor, Don Burd, is also the president of the organization. It was a small turn out, but there were plenty of tools to drool over, I took a couple of tools to sell. One was a Stanley No. 81 scraper which sold even before I put it on a table!

After a short presentation about the early days, there was an auction. Before the auction I noticed a nice Disston rip saw on the auction table, it was nice and straight, some one had tried to refinish the handle, but generally was a clean saw. When it came up for auction it started at $5 and I kept raising the bid until it hit $20, at that point several of the other bidders turned around to look at me, I guess they thought I was nuts to bid so high on a saw. 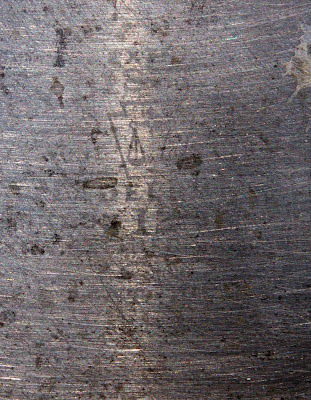 I won the saw, paid for it, sat down and looked at it. You can imagine my surprise to find out that I had just bought a No. 12 rip saw! 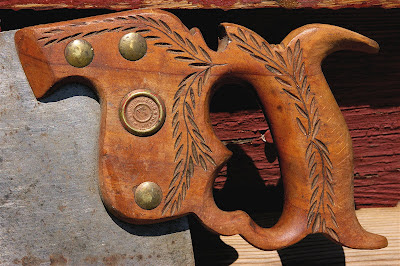 Here's a shot of the handle. With a judicious scraping and sanding and a few sessions of French polish, it'll look more a "real" handle.

Chapin-Stephens Company, Pine Meadow, CT. Did they make a level from padauk or is this wood cherry?

I didn't mean to buy the level, the bidding stalled at $2, I thought I would help it along and upped the bid to $3-needless to say, I won. Dennis McCaigue, a violin maker from Idaho Springs, Colorado, and RMTC member, thought that the body was padauk. I told him I wasn't sure what to do with it, but I could always cut it up into guitar bridge blanks!

One of these days I need to go and visit Dennis and his workshop, I'll be sure to post about it!