Other Uses for A Spokeshave Blade

May 23, 2012
I grew up in a Montana town I thought had no consequence and I wanted out. I could winter okay-it was all I had ever felt, the gray northwestern skies-but I had had enough of family and boxing groceries. I went on my own outside circle, never appreciating the nature of circles and how they bring you back.

Kurt Markus, After Barbed Wire: Cowboys of Our Time, 1985 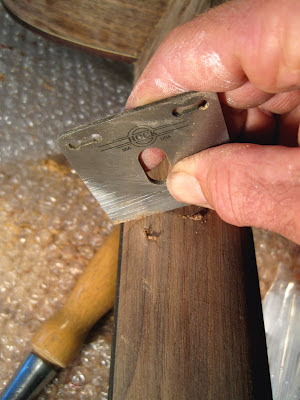 After the varnish stripper sat its required hour on guitar #3 I needed something to scrape the gunk off, this spoke shave blade was handy in the top of the tool box. It worked well

I brought it into my studio and found out that if I sharpen the bevel on a 1200 grit stone, the slight burr that is left on the back side of the blade turns it into a wonderful scraper.

Hock Tools should pay me for this advertisement!


Here's a YouTube of the great cellist Jacqueline du Pre.