What does a Stanley No.0 level have to do with classic guitar making? Absolutely nothing unless you want to level your workbench. I had to include a post on a "whiskey stick" because I found that Rob Gates and Scott Grandstaff (see "My Level") both have great articles on spirit levels currently on the Internet. 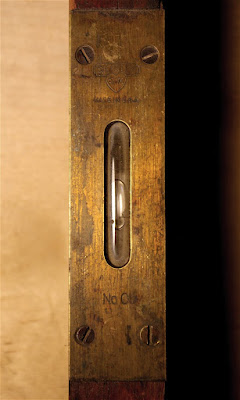 The Offcut, is a wonderful blog, and in his latest posting Robin Gates talks about the wonders of a spirit level. Rob's posts always bring me back to what woodworking is all about, elegance and style. (Thanks, Rob!) Somedays I worry about production and getting things done (or lack of getting thing done thanks to a regular job) in the shop, lately when that happens, I stop myself and remember what it is about the sound of a classic guitar that captured my heart when I was a kid and why it is that no other instrument thrills as much. We, in our current culture here in the United States, need to remember what simplicity is all about and the satisfaction that comes from using our hands. We need to value the work that we do with our hands and find amusement in such a simple thing as a bubble locked in a vial filled with 190 proof alcohol.

By the way, the level belonged to my father-in-law's brother-in-law, Henry Altwater, a man who was a skilled carpenter and owned some really nice tools, which my father-in-law gave me. Henry later became the gardener for the Gilpin County Courthouse, Central City, Colorado. I haven't cleaned up the level to see what wood it is made out of, maybe I won't and just appreciate it for what it is.