February 23, 2012
I immediately began my career as a buffalo hunter for the Kansas Pacific Railroad and it was not long before I acquired considerable notoriety. 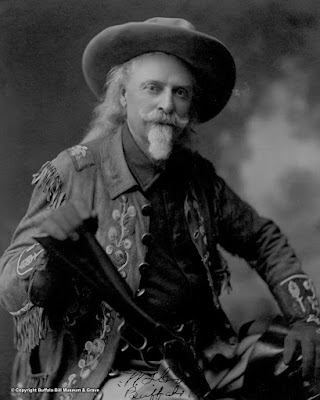 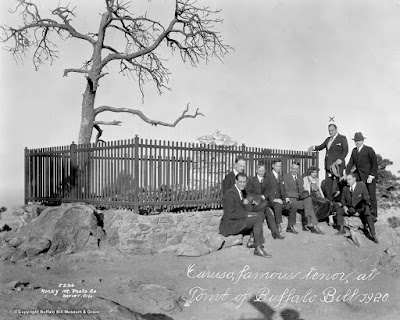 
Visited Will and Louisa Cody's grave site yesterday on Lookout Mountain above Golden, Colorado, it was sort of a pilgrimage for me. My great uncle, Merrill Black, ran away from home around sometime around 1900-02, so the story goes, because he got tired of his father being so strict. He headed for North Platte, Nebraska where he signed on to be a rough rider in Buffalo Bill's Wild West and Congress of Rough Riders of the World. My grandmother and her little brother told me that Merrill was quite the rider, used to pick up dollar coins off the ground riding a horse at a full gallop and other tricks. My grandmother wasn't sure how long he rode for Will Cody, she didn't hear from him until his wife, Hazel, wrote to grandma from Denver. Merrill died in Denver around 1938, I can't remember the exact year, but I was always told that he requested that his ashes be scattered over Cody's grave. Yesterday I paid my respects to my great uncle and one of the greatest showman the world ever knew. Visit the Buffalo Bill Museum and Grave website and if you ever have the chance, visit the museum, it's a great little museum. 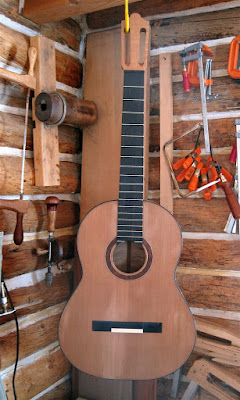 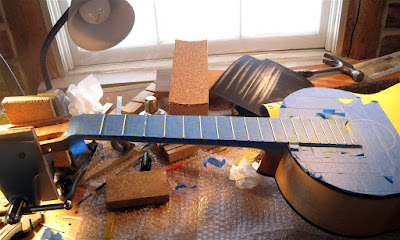 I taped off the fingerboard to protect the ebony from fret filings and the junk generated by sandpaper. 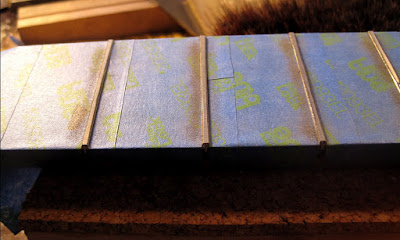 I glued together two pieces of acrylic and made a block that is about 2 1/2 x 8 inches and glued 220 grit sand paper on one side, 400 grit on the other side. I used that block to level all the frets. It's like jointing the teeth on a hand saw, you joint/flatten until every fret has a bright shiny flat spot on it, some will be flatter then others.

After flattening I re-crown the fret tops with a fret file filing most of the flat away, I leave a tiny flat spot to give the straight edge something to register on when I check the finger board for flatness. 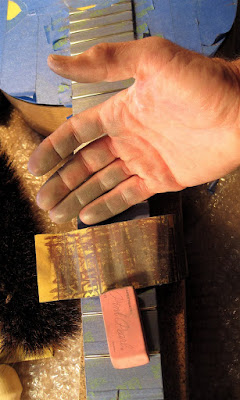 Once the re-crowning is done I go over the frets with wet/dry sand paper starting with 400 grit. I work through all the grits to 2000 grit and polish the frets with jeweler's rouge rubbed onto the paper backing of the 2000 grit sheet. Doing this makes your fingers a little dirty.

After that, I installed the Sloane tuning machines and strung up the guitar. It sounds so wonderful it almost made me cry. I guess I did something right. It is the guitar that every classical guitarist wish they had had when they started first playing-a full, rich sound with a depth to the notes that is hard to explain, other then the sound makes your heart sing and makes you want to play the guitar all day. I can only imagine what it will sound like after six months of hard playing. As soon as I finish the guitar and get access to a digital recorder I'll post a sound clip!

YouTube of the week-Nataly Makovskaya playing a piece by Roland Dyens.