December 27, 2011
American soil and American spirit have created Paul Bunyan. His forerunners are heroes who fed on fable and thrived on exaggeration: Hercules and Gargantua and Gulliver. Bunyan is not only more humorous but more high-hearted than any of his predecessors. He was born in the days when the forests of the Northwest were dark and immense, and the men who lived in them were few and lonely. The trees dwarfed the men; the men had to make themselves big, if only in imagination.

I'm waiting for the bread to rise, thought I'd practice writing a bit.

I have 2 guitars that I want to get started: one will have a spruce top with California laurel back and sides and will be a loose copy of guitar FE 19 by Antonio de Torres; the other will have a reclaimed redwood top with Indian rosewood back and sides, I hope to make this one a very close pastiche of an early 1960's Hernandez y Aguado guitar. Now is the time to start, the humidity is low in my studio. 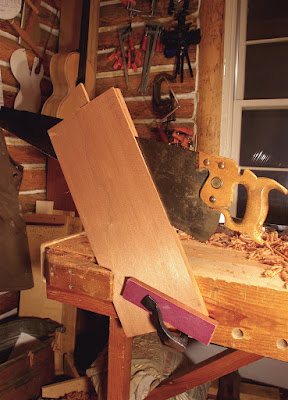 This redwood board was saved from a picnic bench. I couldn't let it sit out in the elements anymore, the board has almost perfect vertical grain and rang like a bell when I first tapped it with my knuckles. It is similar to a redwood top set that I re-sawed from an old redwood water tank, the wood is something to behold! It had been so long since I re-sawed anything, I had almost forgotten what to do! 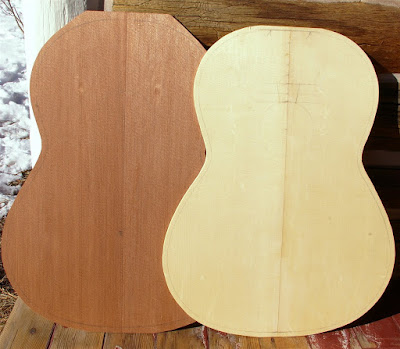 Here are the two tops together. I bought the Englemann spruce top about 10 years ago, it has a great tap tone and some very light bear claw. I should post photos of the rosettes that I am going to use, they were made in Russia and I purchased them through LMI. I look forward to building these guitars side by side, it'll be interesting to hear the differences in the tone woods when I finish them. 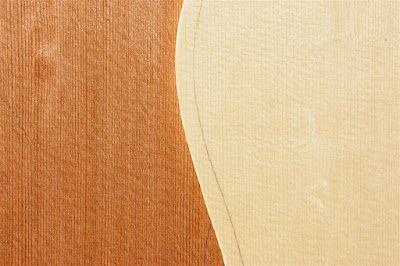 A close up of the two tops. 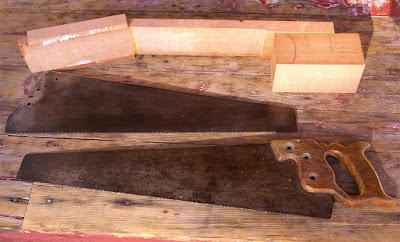 This neck is being made from some Spanish cedar (cedrus species) that I bought from Marc Culbertson at Gilmer Wood a little over 5 years ago. At the time of purchase Marc told me that the company had bought this cedar from a newly retired pattern maker who had had this wood for over forty years. It is marvelous stuff! This is for the redwood guitar. 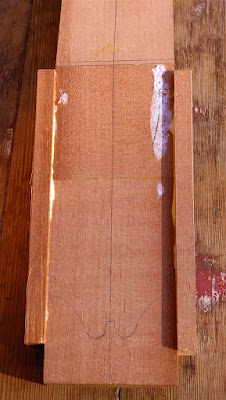 The neck staff is a little too narrow for my comfort in cutting out the peg head, so I added 2 little "ears" to the head blank. As you can see I am copying even the crest that Hernandez y Aguado used on their guitars. I think I will skip texturing the field of the peg head like many of the H y A's where, I did some looking on the internet and found some H y A guitars that had peg heads that weren't textured.

For you tool geeks here is another project I have in mind. I was ripping down brace wood stock for the 2 guitars the other day and I was wishing that I had a shorter panel rip saw instead of the gorgeously large No. 7 Disston rip saw that is my "go to" rip saw. I've 2 other panels saws that are crosscut, but I lack a rip one. Then I remembered these 2 saws hiding out in my other tool chest. So, tomorrow I will drive the Jeep to a nearby wood store and look for some wood for proper handles. (I tried to put the saw nuts back in my grandfather's saw, now they don't fit!)

The saw with the handle is an 10 point 20 inch panel saw, the saw nut states "Warranted Superior" and you can just barely make out the same on the saw etch, the etch is very faded. The saw belonged to my maternal grandfather, he made a handle for it out of black (red) oak, [quercus kellogii] that is indigenous to northeast California. I have no idea how old the saw is. The saw without the handle I made by cutting down an old Disston, I think it might have been a No.7 or a D-7, but the etch is so faded I can't really read anything other then Disston. I think I bought that saw 15 years ago with the intent to make it a mate to the other saw, but to make it an 8 point rip saw. I do remember working on it, reshaping the teeth to rip configuration, I did about 1/4 of the teeth then quit. I must have gotten frustrated. As if I don't have enough projects all ready!