The Wonders of French Polish

November 10, 2011
In my former papers I have shown that the nineteenth century was the century of ugliness, and that the labor-saving machinery which gave us in exchange for the beauty of life degraded the workman without really adding materially to the happiness of the consumer. Some of my readers and critics have called this pessimistic, and so it would be, if I had intended to stop there. But pessimism is the root of optimism and you have to be thoroughly persuaded that things are in a bad way before you are willing to set to work to improve them. 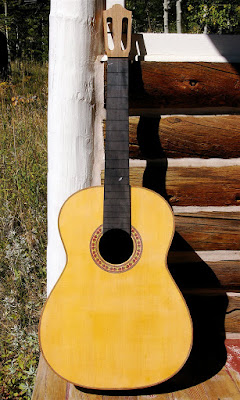 This is a guitar with a Sitka spruce top with eastern black walnut back and sides that I made sometime ago on a Robert Bouchet plantilla and is braced with an asymmetrical bracing from Manuel Hernandez and Victoriano Aguado. When I built it all the books I had read on guitar making up to that point, Cumpiano's Guitarmaking, Sloane's Classic Guitar Construction, Overholtzer's Classical Guitar Making, etc., etc., pretty much stated that a student should stay away from french polish because it was too hard to learn and to stick with lacquer or an oil varnish. Even John Bogdanovich in Classical Guitar Making states that shellac is an inferior finish to use on a guitar. The only book that suggests one can french polish a guitar is Roy Courtnell's wonderful Making Master Guitars. With admonishments like that I stayed away from french polish. Since I didn't have the facilities and proper personal protective equipment to spray lacquer, I tried several wipe-on oil varnish recipes that I found in Fine Woodworking with terrible success. Then I came across an article posted on Bill Cumpiano's website that discussed Frank Haselbacher's use of Behlen's Rockhard Table Top varnish "straight from the can". Just Google Frank Haselbacher and the article appears as "Varnish Technique". I figured if Cumpiano says it's a good product, I should use it. What Cumpiano fails to mention in the article is that Behlen reformulated the varnish sometime after Haselbacher's death. That information comes from an interview in American Luthier #98 with the great luthier, Cyndy Burton. I applied the Behlen product, not knowing that it was not the same stuff as what Haselbacher used, with a brush and within six months that varnish started to yellow, this photo shows what it looked like after a year, the varnish continued to yellow. 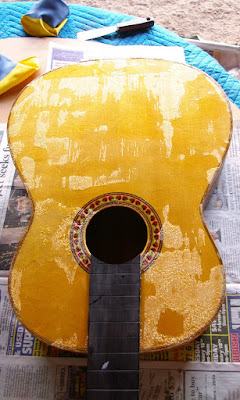 I finished one other guitar with the varnish and after 2 years started to sound as if it were being choked. A man wanted to buy the guitar, so I stripped it, brushed on some shellac, rubbed it out and he loves it.

With this spruce/walnut guitar I bought some Jasco brand "Green Strip" and slathered it on the guitar. Here is the top after about 20 minutes of soaking. The varnish really was "rockhard", some of it I had to let the remover sit for over an hour and a half and I still had to scrape off the leftover varnish. All nasty stuff. 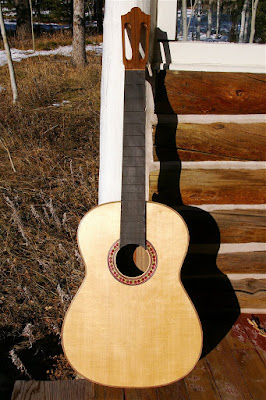 What a difference! The same guitar after a spit coat of "blond" shellac that I purchased from Luthier's Mercantile. You can see that the top is a nice piece of spruce, it has some bear claw running through out the top and if you can view the photo magnified a little more the wood has nice medullary rays to it. You couldn't see all of that under the Behlen varnish. 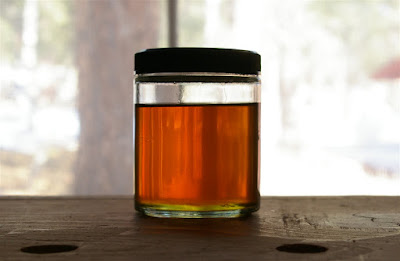 A new batch of 2lb cut shellac. I will say it again, shellac is wonderful because you don't need a hazmat locker in your shop! American Lutherie #96 has a great article on Manuel Velazquez, one of the accompanying photos in the article shows a hazmat locker in the back of their shop, they use Pratt and Lambert's #38 Clear Alkyd Varnish. At Yosemite National Park, due to OSHA regulations, I had to have MSDS sheets on various liquids that I used with me at the job sites, every thing had to be placed in a locker at the end of the day, after that I decided that I didn't want that for my own shop. 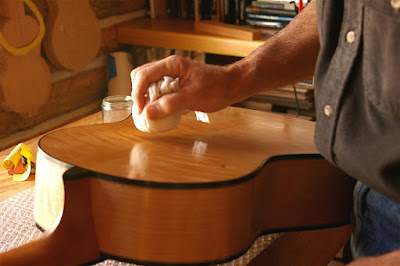 This a blond guitar for a client in Arizona, I am doing a bodying session with a large fad that is made up from cotton gauze covered with a piece of old t-shirt. I plan on going back to using wool for the heart of the fad, I have better control in applying the shellac with wool.

So, am I going to catch hell from treading on the writings of maestro Cumpiano and the other writers of build-it-yourself guitar books? I wish that they had stated that french polishing is a viable option and encouraged their readers to attempt it, it would have saved me a lot of grief and heartache. Ron Fernandez has a great DVD on french polishing, Milburn Guitars has a marvelous tutorial on french polishing that I refer to on a regular basis, even Dan Erlewine at Stew-Mac has a Trade Secret article on french polishing that is very "user friendly"! My next question is why did all those great guitar makers, Jose Ramirez, Santos Hernandez, Francisco Simplicio, Hermann Hauser french polish all their guitars? Why does Jeff Elliot continue to use shellac if it is such an interior finish? Maybe because it works.