Gluing the Back on a Soprano Ukulele

September 23, 2011
Oral cultures have never developed the same capacity for self dissection and information retrieval that our society has. Instead they build holistic visions of the world and self where image and experience are intertwined. In many societies to separate image or sound from experience - its context - constitutes a violation of the natural order. 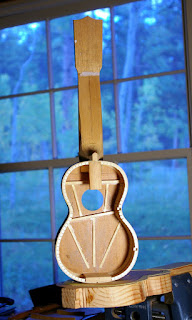 This little beauty is built just like a Torres guitar, it has an domed top. The neck and back block are "in plane" (to use a term from Eugene Clark) with each other, the doming of the top makes it look as if the neck is canted in towards the sound board. The bracing is a variation on one used by Yacobi. The lining blocks are glued in place using an awl to hold the block until the glue set. The lower transverse brace is slanted `a la` Santos Hernandez, this was also done on some early 19th century guitars. Why did I slant the bar? To find out if it makes a difference. 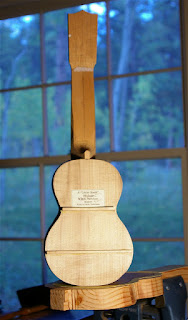 I shaved out the center of the back braces to reduce weight, this idea was borrowed from Jose Romanillos. Ten years ago I read an interview with Dave "Kawika" Hurd done by the staff of The American Luthier magazine, in where he stated that he treated a ukulele just like guitar, he applied the same construction principles. His ukes were well received and liked. Why not follow his example. 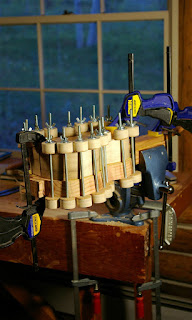 The last guitar that I made I glued the back on with using the solera, workboard, and the lower bout falls away from the line of the neck, which means that I might have to make a taller bridge for the guitar then I had originally planned. I don't think it will hurt the sound of the guitar, but with this little uke I didn't want to risk that problem. I used the work board to keep everything in the proper plane. 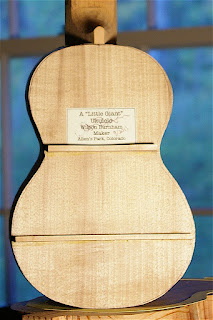 The Little Giant sawmill was owned and operated by the Diamond Match Company at Lyman Springs, California from the late 1940's until it was dismantled in the early 1960's. It was named after a mill that operated in the 1870's that was named for Stephen Douglass, the first "Little Giant". Lyman Springs was just 5 miles south of where I grew up, "the Little Giant", along with Brokeoff Mountain, were part of my young lexicon.