August 26, 2011
Fallers, or choppers, as they are known locally, work in pairs. An outsider is impressed by the number of tools a set of choppers carry around with them in a Redwood operation-two axes, two eight-foot saws, one twelve-foot saw, two dozen plates, one dozen shims, ten wedges, two sledges, one pair of gun stocks, one plumb bob, twelve springboards, six pieces of staging.

H.I. Bower, from a speech presented at the Pacific Logging Conference, 1936 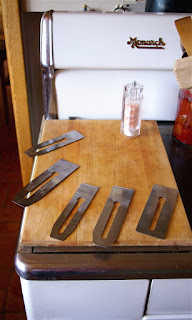 It took me almost 2 hours to sharpen all the plane blades that are on the cutting board, I made a pact with myself never to let the blades get in that bad of shape again. There were more blades that needed sharpening, but that meant going out to the garage to dig out the low speed grinder from the furniture and other stuff left behind by the previous owners that still need to go to Good Will. Another day will be set aside for grinding more edged tools. All I ready needed were the 2 blades for the No. 4 planes, likewise for the No. 3 and 1 for the No. 7. 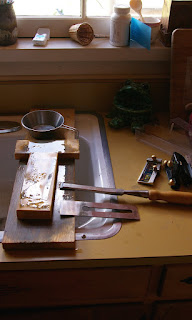 Several years ago I purchased a set of 4 water stones after getting tired of using Wet/Dry sandpaper fixed to a piece of plate glass. I am still ambivalent about the water stones: there is the soaking before using, the almost constant flushing away of the swarf and then flattening the stones on a very regular basis. Granted that 8000 grit stone makes metal very, very shiny, there are times when I miss the ease of using the "Scary Sharp" system of sand paper. After using DMT diamond stones at work, I often think I should have picked up a set, they don't have to be soaked, they cut quickly so you can do the final honing on some 2000 grit sandpaper or extra hard oil stone. I can't say enough about the wonderful Lee Valley MK II Honing Guide, the best guide I have ever used. I enjoy the fact that you can repeat the angle that you need every time.

To be honest, I think the best sharpening system I have ever seen is the one that James Krenov used in his The Fine Art of Cabinet Making. A simple hand cranked grinding wheel with a shop built tool rest is used to establish the bevel and then the blade is honed on an oil stone. How simple and elegant, a part of a handmade life.