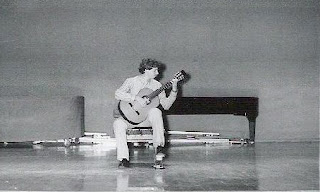 I finally found the photo that I was looking for, of me performing on stage at Montana State University way back when. I still haven't found the program from the final recital. I remember that I played an etude by Sor and a lute piece, Wilson's Wilde and maybe an etude by Giuliani. It was quite the experience and I got to met several wonderful players. I had to include the Billy Joe quote, because I remember I first heard that song on the car radio as we were driving by Idaho Falls, Idaho on the way to this class. I had just graduated highschool and was moving out of classical music geekdom, I discovered punk rock and that kids my age were dying their hair pink and spiking it, I thought that Still Rock and Roll to Me was an anthem for those of us who were 18 years old. Back then I wore Wrangler Cowboy cut jeans, denim shirts, custom Bowman cowboy boots from Livingston, Montana and my hair over my ears.

The guitar that I was playing in the photo I still have, it is a Hernandis Model 1, imported by Sherry-Brenner of Chicago from Japan. The label states that it was made February 1973, has a western red cedar top, the back and sides are Indian rosewood plywood. It is basically a Ramirez with a long string length of 665mm! Most classic guitars are 650mm! Despite the plywood back and sides it is a well made guitar, I keep it as a reference for when I am making full size guitars. I haven't played it in years. My parents and I went in together to buy it in 1979, it cost $779 with tax. Imagine that!

I have started a soprano uke, redwood top and California laurel back and sides, I have been hanging on to this wood for a while and I needed to make something. Recently bought some Old Brown Glue , it seems to be some really good stuff. Will post more about it as I have time.