How Many Handplanes to Build a Guitar? 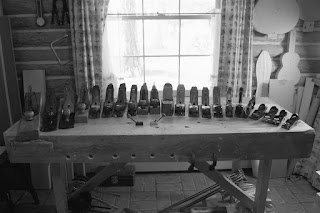 What's wrong with this photo? Can anyone find fault with what is on my workbench?

Now that we are more or less settled into our new place, I had to inspect all my hand tools to see if any were damaged in the move from California. The only one to suffer some dings was my grandfather's Stanley No. 5 plane, then I discovered another problem. I think I own too many hand planes!

Do I own enough hand planes? What do you think?! Oh, you can see my new bench room in the photo.