Trials of a Dodge Pickup 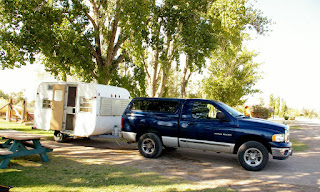 The Dodge and the Go-Tag-Along at the KOA at Green River, Utah

The check engine light came on in my '02 Dodge pickup a couple of weeks ago and I took it in to a local mechanic to see what was wrong. It turns out that engine coolant is leaking into #2 and #7 cylinders, the cooling system is under high pressure from the engine compression and the heads might be ruined. However, the pickup was running as well as it ever did and never overheated, which the mechanic told me it should be doing. He quoted me $3000 for machining the heads and if they were bad it was $6200 for a re-manned engine. He looked at me with disbelief when I told him that no way would I put a re-manned engine in a vehicle that has a blue book value of $3500! As it is it is going to cost me $2200 just to have them put the engine back together, now that they tore it apart to see what was wrong. Now all I can do is hope that the engine doesn't blow up before we can buy a replacement vehicle. 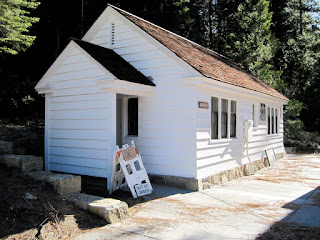 This is the historic Chinquapin comfort station built in 1934, Yosemite National Park. Last Tuesday there was 2 feet of snow on the ground and probably more today since we are getting pounded with rain, it has been pouring down here since 6pm last night. I and Nick were finally able to pull the windows out of this old outhouse 2 weeks ago and this week we stripped the paint from them. In the next couple of weeks we will paint and reglaze these windows. Next week I and Marty head to Piedras Blanca lighthouse near Cambria, CA to get measurements for windows, the originals are date from 1870 and we need to make some copies.