December 23, 2009
The Lacote, Stradivari and other guitars of their eras were of poor design. Their size created difficulty in obtaining volume or quality.
Vincenzo Scaletti, Guitarra magazine, issue 7, Nov.-Dec. 1965

I found some measurements for an original "Legnani model" by Rene Lacote the other day and with the help of a ruler and compass I think that I came up with a close approximation of the guitar's outline without actually getting my hands on the original. I think that this is a beautiful shape, very narrow waisted and, yes, very bulbous upper and lower bouts. The original has a 595mm string length (23 and 7/16 inches) with 21 frets to the sound hole without a raised fingerboard. Luigi Legnani was a guitar superstar in the 19th century and worked closely with Johann Stauffer of Vienna (the original C.F. Martin worked for him before Martin emigrated to the US) to create a guitar that suited his needs. Apparently it was a sought after style for Lacote was one of many who made a "Legnani" model. When he retired from the stage, Legnani became a luthier. 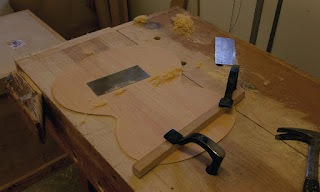 I ended up in the emergency room last week with bronchial inflammation, I had been sanding the replacement door for the El Portal Community Center, even with a dust mask on my asthma went crazy and I was at the John C. Fremont Hospital for 12 hours, not something I want to repeat. Today, I started to sand the Douglas fir top for the Legnani, with a dust mask on and with in minutes I could feel my lungs clinching up. I said, screw what I have read in books on luthierie, where you have to thickness the top with a hand plane or sandpaper, I pulled out my Bahco (Sandvik) scrapers, sharpened them up and discovered how quickly I can thickness the guitar top. Notice the shavings in the background, that is all from the scraper! I guess I am saying,"Don't be afraid to work hard!" Traditional hand tools have worked and will continue to work, to use a hand tool you gain a little strength, you keep the noise level down in your shop and you are a little easier on the environment. 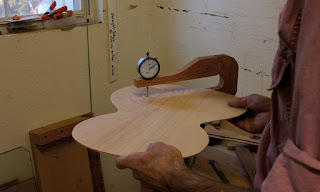 Using my home made thicknessing gauge, note that the top is just a little under an eighth of an inch thick. I have marked with a pencil the areas that need to be reduced in thickness. This gauge also acts as a hygrometer, as the humidity changes the indicator needle moves away from zero. My shop though is usually around 60-65 percent RH even in the summer. Maybe the concrete floor has an influence on that. 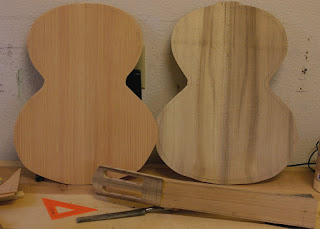 The back is lightly flamed California laurel, the top is Douglas fir from a board that was liberated from a custom home job site about 5 years ago, the sides are also laurel and the neck is red alder. The peghead connects to the main neck with a simple butt joint and I inserted a dovetailed key (made from alder) at the junction. I know alder is not traditional neck wood, but neither is laurel or Douglas fir.

I think the master luthiers of the 19th century were a little bolder then their counterparts of today by making guitars of different shapes and sizes. Today, all classical guitars are the same and they all try to make LOUD guitars. The players of the 19th century had no microphones or speakers and yet they performed concertos with orchestras. Would you play a guitar of poor design to make your living?