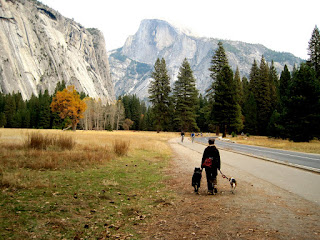 For Veterans' Day we drove the 44 miles from our house to Wawona and then 37 miles from Wawona to Yosemite Valley where my wife walked the dogs and I followed. Stoneman Meadow has such a nice view of Half Dome and Royal Arches. It is always nice to get into the park and remember why we work here and for the National Park Service, we both are still very excited about working at Yosemite. Wednesday was a great day to be in the park, there weren't very many tourists, the hordes have left for the summer. 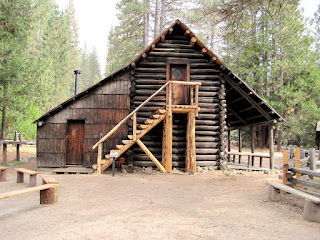 This is the Hodgdon Cabin at the Pioneer History Center in Wawona, which is at the south end of Yosemite National Park, near the historic Wawona Hotel. Several of us in the Historic Preservation crew just built the log steps on the building, it was a summer cabin originally located in Aspen Valley in the northern part of the park, the stairs that were built back in the early 1960's fell down several years ago-here are the new ones.