Half Dome and Tunnel View at Yosemite NP

April 28, 2009
In almost every granitic mountain range (but especially in the Sierra Nevada of California) enormous, astounding hemispheres of naked stone-called domes, appropriately-stand above the surrounding terrain to catch the eye and fuel the imagination. 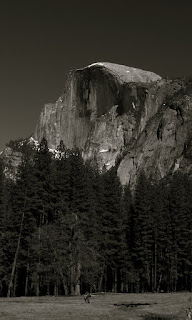 We went to the park 2 weeks ago, stopped at the Yosemite Sugar Pine Railroad, (what a blast) and then braved the traffic into Yosemite Valley. It was the Saturday at the end of spring break, talk about a traffic jam. Yosemite is the Hyde Park of the West. 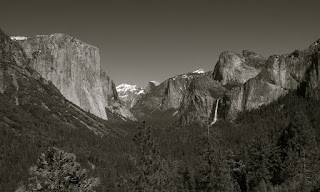 On the way to the valley I just had to stop and take another photo from the Tunnel View. It is always a great spot to people watch, that day there were alot of Asian Indian families there, all the men were in their business suits. If you love to look at waterfalls, now is the time to be in Yosemite. The spring runoff is going great guns and all the valley waterfalls are running full, and there are not that many people in the park. I spent the last 2 weeks working at Curry Village putting shakes on the Curry Village Lounge and everybody is surprised at how few people there are in the park.