September 25, 2008
Ideally, the work bench should be situated near a large window that gathers north light.


I see that this blog is getting alot of hits, can you folks tell me what you are interested in: slotting a new fret board or the new tool chest? I would like to know so I can create a new blog to answer questions. Wilson 7/8/11

I recently purchased a new fret saw from Stew-Mac, my old saw was getting very dull and I am having a difficult time in finding a saw sharpening business that is willing to resharpen it. The new saw arrived with the saw blade reversed so that the teeth would cut on the pull stroke, which is fine if the teeth are shaped like those on a Japanese pull saw. Western style teeth were designed to be cut on the push stroke. Anyway, I used the saw as it came to me and I failed miserably with it, all the slots were terribly angled off perpendicular to the fret board, I wasted a $20 piece of ebony. My solution was to tap the saw blade out of the brass back spline and replace it so that the teeth cut on the push stroke. This gave me much more control. 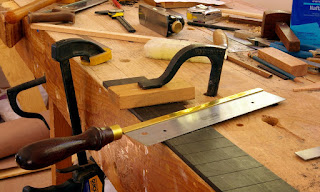 However, even after doing that and using the block setup that you see in the above photo, I still had the problem of the blade cutting slightly off of perpendicular. 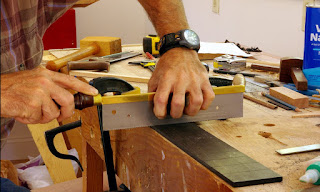 In this photo you can see how I held the saw blade against the block with my fingers making a "galoot" miter box. I managed well with this system, but was perplexed about the saw's cutting ability or lack thereof. I pulled out a set of calipers, I measured the thickness of the blade and the set of the teeth, both were the same measurement! When that happens on any saw the saw will binding in the kerf and make sawing difficult. Good handsaws, Disston, Simonds, Keen Cutter, etc., have hollow ground blades, where the "back" of the saw is ground thinner then the part where the teeth live. I measured my old slotting saw, purchased in 1992, and its blade is thinner then the set of the teeth. 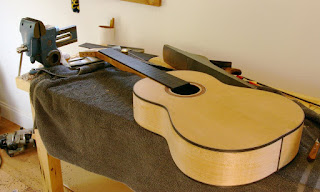 What I have learned from this is that I have several options - 1.) I need to spend the money on a good Lie-Nielson saw and purchase the expensive slotting miter box from Luthiers Mercantile, 2.) I buy a slotting blade from Stew-Mac and put it on my table saw and make a slotting jig, 3.) I purchase all my finger boards already slotted, LMI does that for an additional $9 when you purchase a finger board. Hmm, not a bad idea!

I made a new tool chest for the move to Mariposa, it's loosely based on Duncan Phyfe's famous tool chest, mine isn't as large, I made the carcase out of birch plywood and I made seperate tills to hold my tools. I just have to make a lid, install handles and I am ready to go! 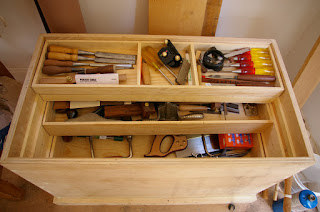